The Wiard World of Cary Grace (Part One)

Cary Grace has followed a winding and unlikely path to arrive at her current situation. Born and raised in the American south, she’s currently living the the United Kingdom. And though her musical career started out in the Nashville singer-songwriter scene, today she makes progressive rock albums. Grace also owns and operates Wiard, a boutique synthesizer maker. Her most recent release—a 12” vinyl pressing—features a cover of Pink Floyd’s “Fat Old Sun,” done in an arrangement that pays homage to the group’s live performances of the 1970 tune.

As a child in South Carolina, Grace would dig through her father’s vinyl records. “Later in his life, he mostly listened to classical music,” she says, “and had a huge collection of classical CDs. So all the old rock records didn’t really get listened to very much.” She recalls time spent with those records as her first musical contact with artists including the Doors, Paul Simon, Miles Davis, Traffic and Pink Floyd. 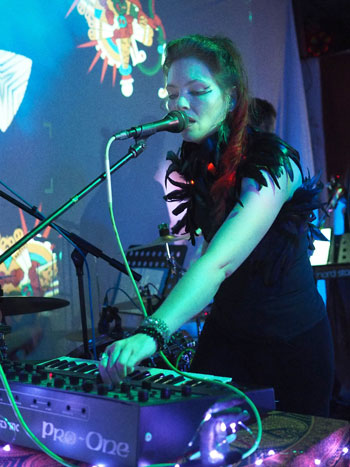 It was the music of Simon–as well as a slightly later discovery, Bob Dylan–that sparked Grace’s interest in songwriting. “I was always really into words, writing and poetry,” Grace recalls. “I loved language. And listening to those two people, in particular, and realizing what you could do in the context of a song with language was what initially drew me to songwriting.” She recalls saying to herself around age 15, “Well, I could do that. I could write songs.” She taught herself some chords on guitar and began to write.

Grace would document her early songwriting efforts using a decidedly low-tech method. “The first overdubs I did were with two cassette boomboxes,” she says. “I’d play something back on one and add another track, so to speak, by recording on the other one. Of course, it sounded terrible, but that was my first multi-tracking.” When she was about 8 years old, her family moved to Nashville, Tennessee where her father had a job in audio tech for the Nashville Network country music cable channel. She soon got a four-track cassette deck of her own. “I learned some stuff from my dad, like how to make my own cables, and how to solder,” she says. “He was always a good person to have around when I’d ask, ‘Hey. How do I do this?’”

Her interest in keyboards would come much later. “I’m not really a keyboard player,” Grace laughs. “I’m more of a synth player.” To this day, her use of keyboard instruments lies primarily within the context of monophonic synthesis. “What interests me more is using a monosynth as a lead instrument, and creating interesting sounds with modulars,” she explains. I’m more into the sound creation and expression. I’m no virtuoso musician by any means.”

Once Grace reached adulthood, she got a job with CMT, Country Music Television. “I was right in the middle of all the country-pop stuff,” she says with a laugh. “It’s not music that appeals to me, though I love old country, Hank Williams and Patsy Cline.”

Developing a musical identity of her own, Grace didn’t feel that she fit anywhere into the Nashville scene. But she did make and release an album there. “I worked on those songs on Book of Rhymes [2004] over years and years and years,” she says. Completing the album took a decade. “I was doing it all myself,” she says. Country star Vince Gill plays mandolin on two cuts. “Almost everyone who played on it was a session player who I had to pay,” Grace explains. “I had my own studios, but it all had to come from me. I had to plan every detail of it, and that’s hard work.”

She believes that Book of Rhymes suffers from having been recorded piecemeal and through overdubs. “The interaction that you can have with other musicians can often create something much bigger than you could create on your own,” she says. “Because you have other influences and other angles; that’s something that album doesn’t have.” She discovered that she wanted to collaborate with like-minded musicians, “people who would just enjoy creating the music with me. And,” she says, “I didn’t really find that in Nashville.”

Grace moved to the UK in 2005. “I just decided I was ready for a change,” she says. “I never really got along with Nashville very well, and you know, if you’re going to go somewhere else, why not move countries?” Today she holds dual citizenship.

Not long after settling in England, Grace put together a band, but admits that “it didn’t do particularly well, and kind of dispersed.” But soon she met Andy Budge. “He has been playing on virtually everything I’ve released since I’ve been here,” she says. “Andy’s just a remarkable bass player; he plays guitar as well. We have a lot of musical tastes in common, and enough differences to make it a good kind of collaborative effort.” Grace says that she and Budge have been the “core axis around which everything rotates” in regard to her music.

Perpetual Motion received positive notices in Progarchives.com, and a German review observed that [translated] “it takes time to listen to this impressive work, but it is worth it for the many analogue sounds, the hypnotic atmosphere and long psychedelic instrumental sections.”

Grace recalls the Perpetual Motion sessions as “an eye-opening experience,” one that whetted her appetite for further long-form progressive rock excursions. To date she has released seven albums and three singles via Bandcamp; several have also received release on physical media, many featuring hand-printed sleeves with design and artwork by Grace herself.

In a rare detour from making music under her own name, in 2010 the ever-busy Grace took part in a transatlantic collaboration with an American DJ, released as Monday Machines. “I played almost everything on there, apart from some guitar, jackhammers and construction noise,” she recalls with a laugh. “I still quite like that album.”

Grace’s exposure to the world of modular synthesis came rather late in her career. “The first time I ever got to really play with the things was when I came over to England,” she says. But she was quickly hooked. “Through music connections, and because of having a self-taught technical background, I’ve ended up building them.”

She hosted a radio program, “Airtight Garage,” and through that she met Grant Richter, founder of the Wiard Synthesizer Company. “After playing his band’s music on my show, I got in touch with him.” She learned that Richter was facing the potential shutdown of his company because health problems prevented him from doing the hand-building of the modular units.

“He was looking for somebody who would be a worthy person to take it on, and at the time I was kind of looking for something else to do,” says Grace. In 2012 she bought the rights to manufacture Wiard gear, calling her company Wessex Analogue. Today Grace does all of the work herself in a small yet well-appointed electronics workshop of her own.