Don Bryant: This is All I Know (Part Three) 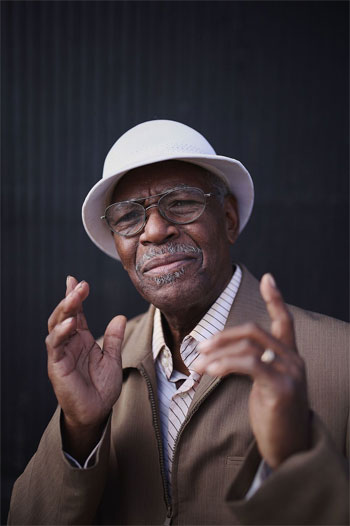 Around that time, the Bo-Keys’ regular singer Percy Wiggins started having health issues that precluded his involvement in some live dates. “Percy was out of performing live for about six months,” Bomar says. “We had shows booked, and all of a sudden our band needed a singer. I asked Don if he would do some shows with us, and he said he would.”

Then age 70, Bryant clearly still had the goods; though he hadn’t been singing soul in years, his gospel work kept his voice in fine shape. Bomar vividly recalls his band’s reaction. “The very first time we played with Don, the guys in the band were looking at me with their eyes wide open, saying ‘Man, this guy is something else!’ And Howard said, ‘Yeah, I tried to tell you all how good Don is.’”

Bomar adds, “Don hadn’t hurt his voice doing a lot of the extra-curricular activities that other singers who were on the road all the time ended up doing. He wasn’t around a bunch of cigarette smoke and bars and clubs for years,” he says. “He’s taken care of himself and hasn’t lived in excess.”

When Wiggins returned, the Bo-Keys continued with both vocalists. “Bruce Watson from Fat Possum Records heard us perform with Don,” Bomar says. “Fat Possum now controls the Hi Records catalog, and Bruce says that Don is probably his favorite Hi artist. So when he heard Don perform live with the Bo-Keys he said he wanted to do a record with him. And I said, ‘Let’s do it!’”

Though accounts differ, it seems Bryant still required some convincing. “Howard and I had some long conversations,” Bryant says. “I guess I just began to listen to him. I thought it over and thought it was a pretty good offer, so I decided, ‘I don’t know whether it will work, but I’ll try it.’ And I think it came off pretty good.”

Bomar says that Bryant was still a bit tentative when he arrived for his first recording session with the Bo-Keys for what would become Don’t Give Up on Love. “He had this moment of, ‘I don’t know; I haven’t done this since 1969. I hope it comes back to me.’” But when listening to the playback of the first tune recorded—“A Nickel and a Nail,” which also opens the album—Bomar recalls that Bryant said, “Oh, okay. I hear it now. I think I still got this.”

After Bryant and the band cut another tune joined by backing vocalists Wiggins and brothers Chris and Courtney Barnes, he was even more pleased. And once they all recorded a remake of “I Got to Know,” the song Bryant had written more than 50 years ago for the “5” Royales, he was nearly ecstatic. “After we recorded that song, we all went into the control room to listen to the playback,” Bomar recalls. “Don started doing this dance. I swear it was like we had gotten into a time machine and went back to 1964!” Bryant is proud of his first secular recording since 1969. “Playing with them and eventually going into the studio with Scott was kind of like homecoming to me,” he says.

Bomar and the Bo-Keys have backed Bryant on a number of live dates since the February 2017 release of Don’t Give Up on Love. “I’d always heard stories from Howard Grimes and other people about how great of a performer Don was in the sixties,” Bomar says with a smile. “He would do back flips off the stage and all these dance moves.” Now at age 75, Bryant leaves out the back flips, but he still does that little dance during “I Got to Know.”

Beginning in early 2018, Bryant joined the Take Me to the River Tour, a live showcase in connection with the music documentary of the same name. Bryant shares a bill with two other Memphis vocal legends, William Bell and Bobby Rush; all are backed by the Hi Rhythm Section and alumni of the Stax Academy. “Don wasn’t in Take Me to the River,” Bomar says, “but him being part of the Hi Records family, it made sense for him to go and do it.”

While no firm plans have been announced, Bryant says he’s interested in doing another studio album. In the meantime, he admits to a bit of nervousness at the prospect of performing onstage again. “I’m concerned about how the crowd is going to receive me,” he admits. “Am I going to do enough to draw them in? I don’t know … I haven’t been disappointed yet at the crowds; it seems like they enjoy what I’m doing, so that makes me just work a little bit harder. Because,” he says, “this is all I know.”