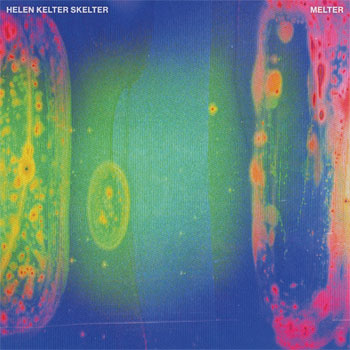 The members of the cleverly-named band Helen Kelter Skelter may not wish that it were so, but they may well be destined to be known as “that other band from Oklahoma.” There’s not a whole lot of information floating freely on the interwebs, so listeners are left to form impressions of the group the old fashioned-way: listening to the music. And in fact the music does have a passing similarity to late 1990s-era Flaming Lips (the other other band from Oklahoma, as it were).

But one shouldn’t make too much of all that. The four-piece HKS makes rocking, psychedelic music on its second album, Melter (I mean, what else were they going to call it?). The disc has eleven songs, and the music really owes more of a debt to 1960s garage rock processed through a modern rethink: their sound lands halfway between the Fuzztones and Black Angels, but with all of the energy of the former.

Wonderfully cheesy keyboard textures (Farfisa, Vox? Rheem?) are all over the album, but there’s a dance-oriented vibe to the tunes that suggests something decidedly more modern than 60s garage psych, something like Stone Roses. “21st Century” opens the disc with a memorable riff, and “Guud” picks up right where it leaves off (same key, even). But “Guud” (some truth in labeling right there) hads an even more hypnotic melody at its heart.

The other songs have a similar ambience, thought some (like “Palamino”) are a bit darker, sinister even. “Palamino” answers the (unasked) question, “What would “My Sharona” sound like if Chocolate Watchband played it?” “Minding” is even spookier, making the most of a minor key. The other songs have hints of a spaghetti western vibe, shoegaze and other like-minded textures, but there’s a cohesiveness – a sonic oneness if you will – to the tunes. A bit of prog even rears its head on the ambitiously rocking “75.”

And when HKS slows things down – as they do on the instrumental “Mysterio Prevails” – one realizes that there’s a creditable amount of depth to the musical approach of this group. Krautrockish mekkanik drumbeats make an appearance in the appropriately-named “Wunschkonzert.” And the band saves the album’s longest cut for last: “Inside Out” plays with the listener’s head in myriad ways. The electric piano sounds like it’s fed through tape wobble, and trip-hoppy drum beats help to create a wonderfully disorienting, cinematic vibe. It’s a strange trip, but like all of the tracks on Melter that precede it, it’s a decidedly enjoyable one.

And that’s why I named it among 2017’s best (even though technically Melter has a 2018 release date).