Album Review: Fovea — Pencil Me In 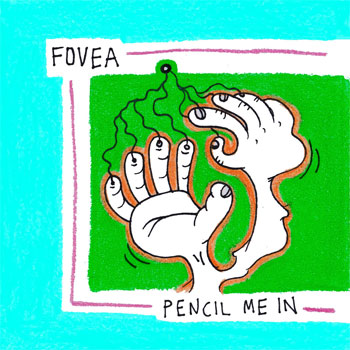 The blippy synth lines that open “Boss Boy” suggest that Fovea’s Pencil Me In is going to be a synthpop album. But not; that impression is corrected after about, oh, three seconds. A gauzy wash of squalling guitars crashes over the synth. Okay, so it’s a shoegaze record, right?

Wrong. The guitars recede, leaving behind that keyboard again, sounding a bit like a 1980s video arcade game. And then the vocals come in: first male, joined by female. And both are heavily processed through – of all things – Autotune! So this is a modern pop album?

Well, no. It’s all of the above, and more. Moody, clever, and damn hard to describe, Fovea makes music that his filled with friendly hooks that suggest 1980s dance-pop acts like ABC, but there’s an ambitious artiness about the four-piece’s songs that reaches far beyond mere dance fodder. Fovea doesn’t sound much at all like Talking Heads, but there’s a similar intelligent approach at work in the album’s eleven songs.

Halley Furlong-Mitchell has a haunting voice, as does whichever male band member is singing along with her. The tunes are alluring, and it’s easy to get lost in the ambient pop soundscape of Pencil Me In.