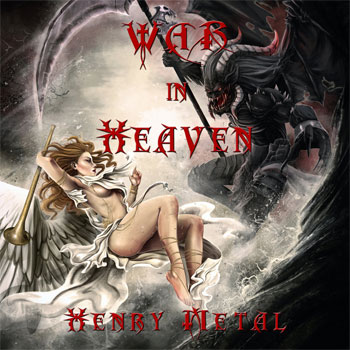 Heavy metal is perhaps the easiest of all rock forms to parody. Its often over-the top brutal riffage, growled vocals and martial tempos are ripe for ridicule. And that might be what the (one assumes) pseudonymous Henry Metal is doing. The gruesome, sub-Frazetta cover art – replete with clichéd typeface – suggests as much.

Or perhaps not. While there’s a silliness to some of the lyrical themes on War in Heaven (Mr. Metal’s fifth ful-length release in the space of a year), there’s a silliness ot some of Black Sabbath’s best tracks. But Tony Iommi never played this fast; the songs on War in Heaven are very much in the Yngwie Malmsteen, faster-is-better school of guitar.

Luckily, there’s a strong melodic sense on Metal,s writing style. And he occasionally dials the intensity down: take the tune with the unassuming title of “Epic” – its starts with elegiac piano and impassioned vocals. And while the listener might spend much of the tune’s first thirty seconds or so awaiting for the big shift into speed-metal mode, it doesn’t happen until nearly the four-minute mark (and the whole tune clock in under six minutes). Pig squeal guitars do make their appearance – as they would on such an album – but at its heart, “Epic” is something akin to a metal power ballad.

Elsewhere, “Gimme a Break” is lunkheaded riff metal, with liberal splashes of Metallica-style chunka-chunka stuttery guitar. But even on this rote metal tune, Henry Metal displays his musical virtues. The repetition guitar figures in the bridge are almost hypnotic, and although some of the vocal lines suggest Beastie Boys, elsewhere Henry Metal is singing in sweet overdubbed harmony. And the guitar “solo” is pretty awesome (it features lots of overdubbage too).

How much metal is too much metal? Five albums a year just might be too much. But taken on its own, War in Heaven is a pretty satisfying does of musical metallurgy.