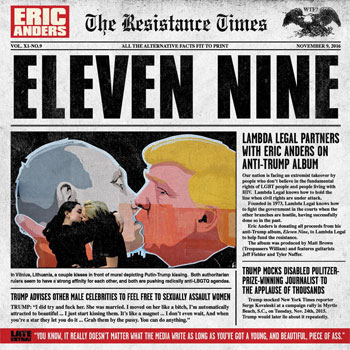 It’s often said that the 1960s were the Golden Age of protest music. By the end of that decade, times had changed. The thinking goes that after the disillusionment of the assassinations of RFK and MLK, the Vietnam debacle and Watergate, Americans turned inward; author Tom Wolfe went so far as to coin the 1970s the “Me” Decade. But against a renewed assault on some of American society’s most marginalized groups – people of color, immigrants, the poor, the LGBT – there are early signs that a new age of protest music may be at hand.

Eric Anders’ Eleven Nine is a meditation on our times. The opening cut, “The Fire Has Burned Too Long” has a sound and feel redolent of Nightcrawler-era Pete Yorn (as d a few of the album’s tracks), but this Bay Area singer/songwriter has more on his mind – and more in his musical approach– than one style. A cover of “Who’ll Stop the Rain” doesn’t add much to the Creedence Clearwater Revival original, but then that’s likely not the point; instead, its inclusion is meant to underscore Anders’ social conscience.

Elsewhere, Anders’ songs evoke memories of the rock-leaning end of classic protest music: “How Low and Why” may remind some listeners of CSNY’s Neil Young showcase, “Ohio.” But the most compelling song – both musically and in its lyrical content – is “Looking Forward to Your Fall,” an unabashed middle-finger aimed squarely at the current – and one must remember, temporary – resident of 1600 Pennsylvania Avenue, Washington D.C.

The album’s title is a clever way of expressing that the date of Trump’s election is in some ways a mirror image of the disaster that happened on American soil on 9/11. That connection might sound like hyperbole, but to those pushed to the margins of society, the connection is perhaps easier to understand.

Anders doesn’t offer any easy answers – in large part because none exist – but he raises the issues, and does so in an appealing musical context. And that’s enough to make hearing his music a worthwhile experience.