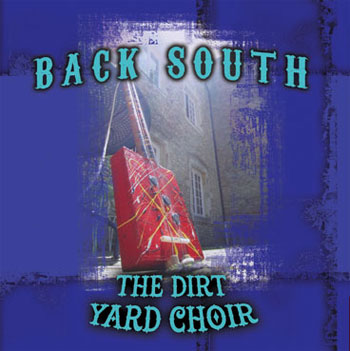 Led by singer, songwriter and cigar box guitarist Todd Cecil, Back South is a WNC-based trio that specializes in country blues with a decidedly hard-edged rock sensibility. Imagine ZZ Top without all the filigree, leaning back toward their blues roots. Now picture a guitarist who plays a custom instrument fashioned out of a cigar box and broom handles. Back him up with a solid drummer in Scott Harte, joined by lead harmonica player Mike Fore. The result is Back South.

That spare set of instruments yields a deeply textured sound on The Dirt Yard Choir. But the unconventional trio makes the most of its intentionally limited musical arsenal; on tracks like “Muddy Water,” Cecil and Fore spar on their respective instruments while Harte keeps the song moving forward with a solid back beat.

There are few if any production tricks or gimmicks on The Dirt Yard Choir; it’s raw and real. Occasional guests add unexpected tone color to the album; listen closely and you’ll hear Theremin and saxophone. Back South delivers a rollicking set of fifteen songs suffused with knowing humor. “Sasquatch” may remind listeners of a certain age of Wall of Voodoo’s “Mexican Radio,” but like all the tracks on the album, it’s a wholly original creation from the just-twisted-enough minds of Todd Cecil and his band mates in Back South.