Are you ultimately optimistic or pessimistic about humanity’s future?

I’m optimistic, actually. Again, to go back to the Paris Accords, I think that is a remarkable achievement to have the entire world – bar one [nation] – sign up for something where they were putting our planet before national interest. I think it was an epic moment in human history, and I think that should give everyone a great deal of faith in our ability to see sense, even though it might be at the eleventh hour, and to start to do the right things about it.

But it needs tremendously skilled and forward-thinking leadership to do that, and I think with Trump we don’t have that. I do believe that there are plenty of other people waiting in the wings who will hopefully take over. The thing that is most disappointing is how spineless the people around him seem to be; that’s the thing that really is shaking me. As an outsider looking in – I’m British, so I can’t vote here or anything – I see someone who clearly has no experience to step up to something like this and take on the role of president, and yet I don’t see anyone around him that has any kind of strength, or courage, or moral backbone whatsoever to just say something. Well, there are a couple, but yet they’re all saying it as they’re leaving, so it’s not particularly courageous at all, really. You know, we can all be brave as we’re walking out doors and there’s no consequences to take.

But I am optimistic. I do believe there are the people that think differently, and hopefully when Trump’s had his moment, those people will step in and things will be on a more intelligent level again.

With each project that you take on, do you endeavor to avoid covering the same ground? 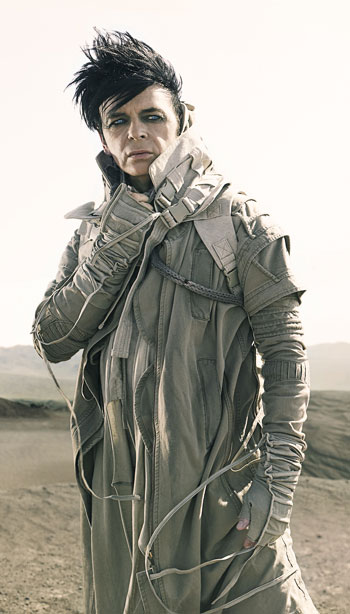 It’s pretty organic, actually. I do think I dwell on some things more than I would like to. I drift back into writing about religion probably more than I should. When I sat to write Savage, I did know that I didn’t want to do a load more songs about depression, which is what the last one [Splinter: Songs from a Broken Mind, from 2013] was about. There was a conscious decision there to not repeat myself, but I don’t remember ever sitting down and thinking, “I have to do something completely different.” You know, not repeating yourself is slightly different to your conscious decision to having to keep finding different things.

Even though your music has always transcended synthesizer-based electronica, you received the Moog Innovation Award in 2016. To what degree would you describe your current music as technology-oriented?

Technically, it’s extremely technology-driven, but at its heart it’s very organic. Pretty much every song that I write is simply me sitting down with a piano and working up melodies and structure and so on. So, if you take away all of the production of this album, and just come back to that original piano and vocal, then you’ve got an extremely organic core.

But then you begin to work in that, you begin to build these through, and then the technology really comes into play. So, I do think Savage is essentially a technologically-driven record in terms of sound and so on, but at its heart there’s a human being trying to come up with simple tunes.

Your keen melodic sense is a hallmark of your writing. You write hooks even when you’re creating a dark and foreboding musical landscape. When writing, do you place a high value on melody?

The melody is everything, everything. That’s all there is, really. I would say 95% of that is worked out first on the piano, and then when I did the vocal for it, I’d then move around that piano-written vocal to give it more expression. No matter what kind of music you do, every single note has to be the right note in the right place at the right time, obviously. Musically speaking, melody is the key to everything. It’s the one building block everything else sits upon.

A few years ago, you were quoted as being interested in soundtrack work. Have you made any moves in that direction?

I did, actually. When I came to Los Angeles at the end of 2012, I was fully intending to throw myself into film music, pursuing that as the next stage of the career. I did one film with Ade Fenton; he produces my stuff as well. We did an animated film called From Inside, and I really did enjoy it. We had a really easy time with it as well. The director, the producer and all the people that were involved in it – people who can potentially make your life a misery – were all very, very lovely.

But I’ve got a number of really good friends here that are very successful composers and do an awful lot of work in film, and I listen to them. There were so many stories of having nightmare sessions where people would come in and want to change everything that they’d done, and they would make those changes, and then go to another meeting, and then they’d change their mind again. It just sounded horrendous!