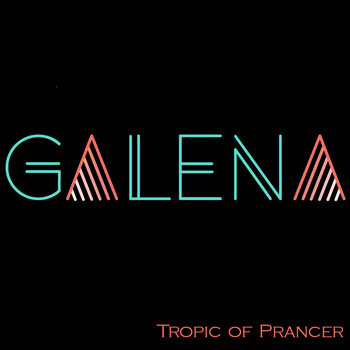 Progressive rock is often and wrongly though of as a man’s game. There’s a long-standing cliché that paints both the artists and audiences as black t-shirt-wearing white males. But in fact the comparatively highbrow rock subgenre has a long and proud tradition of female involvement.

Against that backdrop – and with the support of a reasonably substantial coterie of progressive rock fans in and around Asheville – it’s not so surprising that the area would be home to a female-fronted prog group such as Galena. What is perhaps unexpected – and wholly irrespective of gender – is just how good the young(ish) five-piece really is. The members draw from a number of musical traditions – math rock, pop, alternative – as they craft original material.

Galena hasn’t been terribly prolific in terms of recording and releasing its music, seemingly favoring quality over quantity. A new three-song EP, Tropic of Prancer, is to date the only official recorded document of Galena’s sound.

The band sometimes downplays its prog pedigree, instead labeling itself a “progressive alternative pop rock” band. Labels aside, the kinetic and constantly shifting musical underpinning of “Cyber Funday” – the opening cut on Tropic of Prancer – makes it clear that a balance of defiantly complex instrumentals and accessible vocals is the band’s stock in trade. Guitarists Max Miller and David Singleton spin out blindingly fast (yet melodic) guitar lines. The precision rhythm section of Casey Waters (bass) and Joel Clark (drums) executes a series of musical left-turns while keeping the group tethered to Earth. And at the center of it all is lead singer Melissa Pasciolla, soaring vocally with a mix of passion and control.

As “Cyber Funday” ends, the EP slides almost imperceptibly into the title track. With a guitar figure that recalls Andy Summers’ collaborative work with Robert Fripp, the song features a memorable, exhilarating and upbeat lead vocal from Pasciolla. Love songs are rare in the progressive rock world; “Tropic of Prancer” is a welcome addition to that small corner of the genre.

After an understated solo guitar opening, “Negus” explodes. The band fires on all cylinders, displaying what seems to be a Galena trademark approach: Pasciolla sings vocal lines that could easily sit atop a slow- or medium-tempo pop song, and the band charges along behind her at full speed. As described, that might seem likely to create a kind of disconnect or even dissonance. But in practice and execution, it works quite well; the overall effect is reminiscent of the approach 1980s-era King Crimson used on songs like “Frame By Frame,” and it’s done with more pop appeal than Crimson ever did (or wanted to do). Galena makes use of the familiar fast/slow, loud/quiet prog tropes, but never once on Tropic of Prancer‘s trio of songs does the approach sound forced or unnatural.

The band recently ventured north to Johnson City for a weekend gig; more typically Galena can be found playing live at any of Asheville’s more intimate music venues (The Odditorium, Boiler Room, Sly Grog Lounge, The Grey Eagle). Reportedly, more studio work is in the group’s future. “We are fortunate enough to have a composer in the band [who] requires very little sleep,” Pasciolla tells me, “so we are never short on new material.” If that turns out to be the case, listeners can soon look forward to more original recordings from Galena.