Trumpeter and band leader Miles Davis was one of the most important and innovative musical figures of the last hundred years. He tirelessly explored a wide variety of musical dimensions, changing the rules and pushing the boundaries of every style he touched. Davis died in 1981, but his influence and legacy live on in many forms. One of the most intriguing of these is the Miles Electric Band, led by Davis’ nephew, drummer and frequent sideman Vince Wilburn, Jr.

The band first came together in 2010 when Davis was asked to put together a group to celebrate the 40th anniversary of one of Davis’ most important works, the landmark jazz-rock fusion double LP Bitches Brew. Wilburn says that his goal in assembling the group – originally called Bitches Brew Revisited – was to bring together “guys who had played with Miles or who had love for that music.” 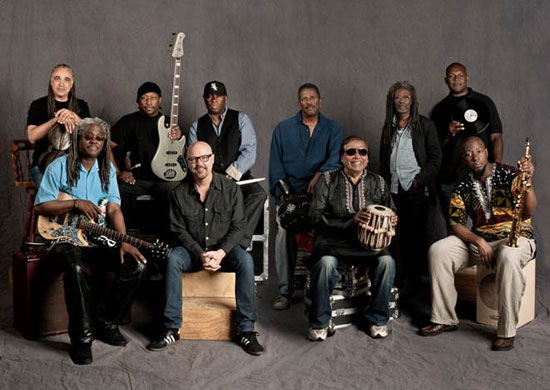 After that debut, the band renamed itself and expanded its scope. “We offer our interpretation of Miles’ electric period,” Wilburn says. That era is generally accepted to cover 1968 to 1975, beginning with In a Silent Way and continuing through a series of mid ’70s compilation albums.

A hallmark of Davis’ work in that period – and indeed of all jazz – is a focus upon improvisation. The Miles Electric Band faces a challenge: embracing the spirit of innovation and exploration while remaining true to Davis’ original recordings. And Wilburn happily accepts that challenge. “Because the core of the band actually played with Miles,” he explains, “we have an edge. We have a way of interpreting the music live. We know how to keep true to the music but put a spin on it.” He refers to the experience of playing with his uncle as having graduated from “the University of Miles Davis.”

The group also features younger, top-level players in the rock, jazz and funk idioms, including former Prince bassist and experimental musician Dwayne “MonoNeon” Thomas Jr. But the Miles Electric Band doesn’t have a full-time member playing Miles Davis’ instrument, trumpet. Instead the group uses a variety of top-notch guest players. “Each trumpeter has a different way of approaching the music,” Wilburn says. “Not to cop Miles, but to interpret their own way of expressing themselves in Miles’ music. It’s exciting that way.”

While the Miles Electric Band was conceived as a live performance unit, the group records all of its shows, and plans are underway to cut an album. That release will likely follow on from another of Davis’ favored approaches: the combination of live and studio recordings into a cohesive whole. “Uncle Miles never shut the tape off,” Wilburn says. “He just let it roll. And that’s the way I love to record; you come up with gems inside of gems.”

The group’s web site prominently features a famous Davis quote: “Don’t play what’s there. Play what’s not there.” Wilburn tries to live by that advice. “Play something different,” he says. “Forge ahead.