At a time when rock music was taking a turn away from bloated arena rock toward stripped-down punk (and its commercial successor, new wave), the Blasters came onto the national scene with an even more rootsy approach. Led by brothers Phil and Dave Alvin, the group came from Downey, a city in metro Los Angeles.

The Alvin brothers were steeped in real rock ‘n’ roll; as far back as the late 1960s, they were backing Big Joe Turner, famous for—among other successes—early classics like “Shake, Rattle and Roll,” “Honey Hush” and “Boogie Woogie Country Girl.” 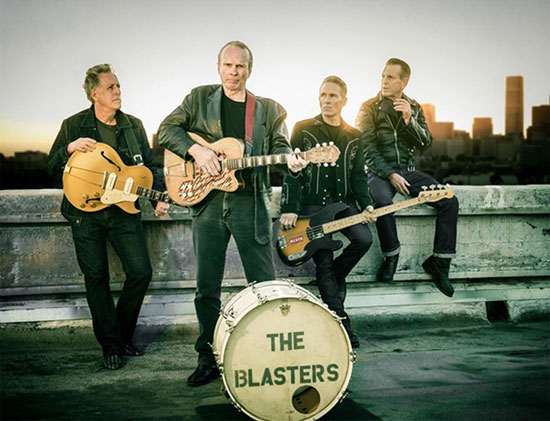 Singer-guitarist Phil Alvin recalls that it was years later when his band decided to call themselves the Blasters in a kind of tribute to Turner. “I thought Joe Turner had a band called the Blues Blasters, on Atlantic Records.” Turner explained that it was actually Jimmy McCracklin who had such a group. “And Joe said, ‘That’s all right. Jimmy McCracklin is a good friend of mine, so you’ve got permission to use his name.’”

Championed by friends and fellow Los Angeles group X (with John Doe and Exene Cervenka), the Blasters landed a deal with independent Slash Records. A fixture of L.A.’s punk scene, the Blasters stood out even among hard-edged acts like Black Flag and the Gun Club. The Blasters’ sound had firm foundations in early, r&b-flavored rock ‘n’ roll and rockabilly.

“And then the first record [on Slash] took off pretty well,” Alvin says, “so that cemented the relationship.” Released in 1981, The Blasters was a roaring studio document of the band’s high-powered live shows. Critical praise for the album was widespread.

Phil Alvin describes the band’s signature sound as “roots-based, but with songs that are a little more contemporary in their structure.” Emphasizing that the Blasters avoided a slavish, studied approach, he says that even in the early ’80s the group’s music “was un-selfconscious, that’s for sure. Everybody just banged away at what they did, and that seemed to work real well. We tried to keep it as well-rooted as we could, and still give it the energy necessary to succeed during the punk times.”

When Slash lost its distribution deal, the indie label would be absorbed into the Warner Brothers music conglomerate. But unlike similar stories, the Blasters didn’t find themselves pressured to change their musical direction toward a more commercial style. “We sort of made that deal happen,” Alvin says. “Because Slash didn’t want to do it, or at least they said they didn’t.” He says that the label executives at Warners were “pretty understanding” of what the Blasters were about. “It was surprising,” he admits.

Dave Alvin left the group on good terms in 1986, starting a solo career (he has returned occasionally as a musical guest). But Phil says that he never once considered ending the Blasters in the wake of his younger brother’s departure.

Still, after Dave Alvin left, the band’s run of studio releases ended. But the Blasters would continue on-and-off live performances, releasing pair of live albums (Trouble Bound and Going Home) in the early 2000s. In 2005 the band entered the studio for the first time in two decades, recording the album 4-11-44.

And in 2012, the Blasters released Fun on Saturday Night, a collection of classic covers that pays tribute to the sounds of early rock ‘n’ roll. Alvin says that the goal of that record was “to do a lot of the songs that we had been influenced by, and loved.” Fun on Saturday Night features one original Blasters tune, a Spanish-language remake of Dave Alvin’s “Marie Marie,” originally recorded for the band’s 1980 debut, American Music.

Phil Alvin jokes about his motivation for keeping the group going as its 40th anniversary approaches. “Gotta make a living!” he says. But he allows that he truly enjoys playing and being on the road with his band. “T-Bone Walker once told me, ‘Just keep playing,’” Alvin says. “And that’s pretty much the best advice I ever had.”