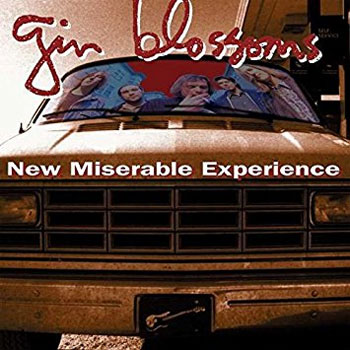 With a title that wryly referenced the two-part reaction the band was getting from fans, Congratulations … I’m Sorry would reach #10 on Billboard‘s album charts, and featured three hit singles. But a little over a year after the album’s release, the band broke up. The official reason given was that lead vocalist Robin Wilson wanted to do his own project.

“But what was really going on was that everybody got burnt out from being on the road,” Johnson says. “I think it was just fatigue; nobody wanted to work that hard again. You make a little bit of money and you’re a big rock star. You’re on the cover of magazines, and then you make another record, and then it becomes work.”

The band members went their own ways. Wilson and drummer Philip Rhodes formed Gas Giants; that band released an album in 1999. Valenzuela eventually released a solo album and got into producing. Bassist Bill Leen worked in music before opening a book store. And Johnson joined Roger Clyne and the Peacemakers, an early alt-country band.

As the end of the century approached, Arizona Attorney General Grant Woods contacted the former band members. “He told us that every city was doing a big millennial thing, and [Phoenix] wanted us to play in theirs.” Gin Blossoms got back together for a one-off performance. “There were no fights, no hard feelings,” Johnson says. “It was just kind of fun to see everybody and do a show.”

About a year later, Johnson got a call from Wilson. “He said, ‘Bill and I have been getting together writing songs. We get together on Tuesday nights; can you come over next Tuesday?’” Johnson said yes, and then he stopped to think. “I thought, ‘What are they writing songs for?’”

In any event, he showed up for practice. “And then,” Johnson recalls, “before we even played a note, Robin said, ‘We’re thinking of getting the band back together. Are you willing to leave the Peacemakers?’” He was. “We called Jesse the next day, and it all fell into place pretty quickly.”

With the benefit of hindsight, Johnson thinks it was foolish to have disbanded in the first place. “We made the big mistake of breaking up while we were on the charts. I guess it’s the silliest thing, but a lot of bands go through that.”

Gin Blossoms’ 2002 tour was billed as a reunion. “It went pretty well,” Johnson says. “So that’s when we really decided, ‘Let’s just keep it going; let’s be a real band. Let’s make records and do all the things that bands do.” With the exception of Rhodes, who’d leave in 2005, the New Miserable Experience-era lineup of Gin Blossoms has remained intact ever since.

The band released Major Lodge Victory in 2006, followed four years later by No Chocolate Cake. Neither disc stormed the charts like the band’s ’90s work, but both reached the lower rungs of the album charts. But with the 25-year anniversary of New Miserable Experience, the band decided to celebrate with a tour commemorating its breakthrough release.

November 2017 saw Gin Blossoms traveling up and down the West coast for nearly a dozen California dates; the group’s December itinerary includes as many shows, mostly in the eastern U.S. More dates are to be announced. All the shows include start-to-finish performances of New Miserable Experience.

With the band’s focus back upon its landmark release, Johnson has given some thought to the record’s timeless and enduring popularity. “You’ve got to give a lot of credit to [producer] John Hampton,” he says. “I can’t express enough how great of a producer he was.”

He notes that the album is “all over the map” style-wise. “I remember thinking how diverse New Mis was,” Johnson says. “There was a country song, there were these really slow ballads, and then of course a bunch of rock songs. I remember thinking, ‘This is pretty risky.’ It’s just one of those things with the performance, the engineers and the producer. If it all comes together, something special happens. And New Mis was one of those records.”

In 2017 the band recorded a new studio album. But since Hampton had passed away in 2014, Gin Blossoms needed a new producer. They chose Mitch Easter. “We spent two weeks in Mitch’s Kernersville, N.C. studio, with him and Don Dixon. We like southerners for some reason,” Johnson laughs. “Mitch seemed like a perfect fit. He’s a mad scientist! He ‘s so quiet; he hardly says a word. But he’s so good at tones and mics.”

There’s no release date set for the new album, but Johnson expects it to come out in 2018. The current concert dates will preview some of the new material cut with Easter. “But right now the focus is on New Mis,” Johnson says. Thinking back once again to the time when Gin Blossoms made their breakthrough album, Johnson recalls what he thought of the band right before he joined. “It was a party band … a party band that just happened to have a lot of great songwriters.”