Guitarist Scott Johnson almost missed out on a career path that saw him taking over for the lead guitarist in a band right as it broke through. Had he not taken some advice from an older musician, Johnson might not have even been playing rock ‘n’ roll. And he wouldn’t have joined Gin Blossoms as they toured in support of New Miserable Experience, an album eventually going multi-platinum and now recognized as one of the biggest-selling albums of its era.

“I was a jazz major in college,” Johnson recalls. “I was a jazz guy. My brother is a singer, and so I’d do gigs with him. One time we hired a drummer from college; he was older, like 35. I was probably all of 20 at the time. After a gig, we sat down and had a beer. And the drummer asked me, ‘Why are you studying jazz? I just played four and a half hours of rock ‘n’ roll with you. You’re a rocker.’”

The drummer pointed out to Johnson that their hometown of Tempe, Arizona was full of rock bands that played their own music. “So I went to see one of them, a band called the Jetsons,” Johnson says. “There were about a thousand kids lined up to see them. And they knew all their songs. That’s when it hit me: ‘Okay, I need to change here.’” 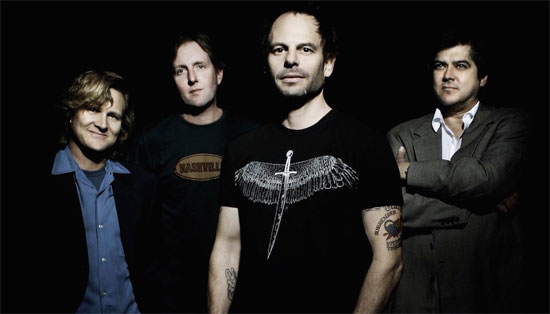 Johnson changed his focus to songwriting. “You have to make a commitment to writing songs and playing originals,” he says. “It’s a mindset. Otherwise you’re just going to be in a cover band the rest of your life.”

He was very familiar with another Tempe band, Gin Blossoms. “They were local celebrities, you could say; everybody knew Gin Blossoms,” says Johnson. “They were the biggest band around the Valley.” The Gins were one of those groups that wrote its own material; in fact most of the band members wrote songs.

But Gin Blossoms had a problem. The band’s lead guitarist Doug Hopkins was a serious alcoholic. The band had already released its first indie album, attracted the notice of major label A&M, and signed a deal. In fact they had already recorded and released their second album, New Miserable Experience. That record featured a dozen original songs, 5 of which were composed or co-written by Hopkins.

Things got so bad with Hopkins that A&M told the band they needed to fire him. They did so, and auditioned new lead guitarists. The band Johnson played in sublet rehearsal space from the Gins, and he was friends with guitarist Jesse Valenzuela. “I would tell people that he let me join the band because my gear was already there,” Johnson says with a laugh.

He successfully auditioned for Gin Blossoms, but upon joining was told in no uncertain terms, “Look, if Doug sobers up, you’re out.” While New Miserable Experience was a slow starter on the charts, it eventually took off in a big way, spawning no less than 5 Top 40 hits: “Hey Jealousy,” “Found Out About You,” “Mrs. Rita,” “Until I Fall Away” and “Alison Road.”

But the sidelined Hopkins never got sober. “If anything, I think he got worse,” Johnson says. Hopkins had joined another local band, the Chimera, but his constant no-show for gig got him kicked out of that group as well. “He was really suffering at that time,” Johnson says. “It was really sad. ‘Hey Jealousy’ and ‘Found Out About You’ had both been singles on the radio, so at the time he was already a hit singer/songwriter. He had all the successes that come with that. But even after his dreams came through, it still wasn’t enough.” On December 5, 1993, Hopkins took his life using a .38 caliber pistol.

Meanwhile, Johnson had some big shoes to fill; despite his problems, Hopkins had been an excellent, distinctive guitarist. So while new fans across the nation – ones who had bought New Miserable Experience – didn’t much know or care about the personnel change, when it came to local Tempe fans, it was a different story. “We were rehearsing, and I was trying to learn all Doug’s parts,” Johnson recalls. “And the local crowd would be like, ‘Hey, that’s not the solo to “Hey Jealousy!”’”

Plenty of bands fall apart – or at least stumble – in the wake of losing a member. And even more suffer from the dreaded “sophomore slump” when it comes to making a second major-label album, especially one that follows a major success. But unlike the stories you’ll hear from countless other bands about lack of support from the label, Johnson says that A&M was behind Gin Blossoms all the way.

In the wake of Hopkins’ suicide, the band members didn’t want to stay on the road. “But [A&M] kept pushing us, saying ‘This is working,’ and ‘We’re seeing the [sales] numbers rise.’ I think we had our own personal doubt,” Johnson says, “but the label was always there.”

Johnson says that Gin Blossoms “toured forever” in support of New Miserable Experience. The string of tour dates stretched across three years. So it wasn’t until early 1996 that the band released a follow-up album. Much about the sessions would be the same as the last time around: the songs were cut at Ardent Studios in Memphis, with John Hampton producing. “We were in Memphis for two months, Johnson chuckles. “That was back when you had record company money and could do that kind of thing. Now, we make records in about two weeks.”