A Look Back at ‘Steppenwolf’ 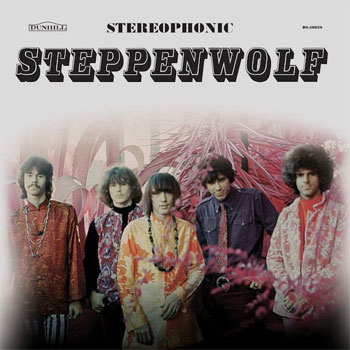 Formed in Toronto and adding two Los Angeles-based musicians, Steppenwolf came on the music scene just as hard rock was heading toward its ascendancy. Looking for all the world like a biker gang, Steppenwolf could have been created by central casting to portray a hard-edged, leather-clad group of rockers. But in fact the band – led by vocalist and guitarist John Kay – was a real group.

Steppenwolf had released its debut single – “A Girl I Knew” b/w “The Ostrich” – in late 1967, but the 45 went largely unnoticed, making not a ripple on the singles charts. Both tunes would be included on the group’s self-titled LP, recorded in the fall of ’67 and released in January 1968. In fact 8 of the album’s 11 tracks would eventually appear on singles as the band’s reputation took off.

For its debut album, the band worked with Gabriel Mekler, house producer at Dunhill Records. Mekler’s résumé at that point was quite thin; his only previous production credits were three singles by Dunhill act Lamp of Childhood. But working together, Mekler and Steppenwolf crafted a debut album that defined the new rock subgenre that would come to be known as heavy metal. (The term would eventually come to represent a very different style of music, but in 1968, heavy metal meant Steppenwolf, Iron Butterfly, Blue Cheer and other heavy, loud rock acts.)