Modern-day bluesman Chris Cain grew up in San Jose, but his roots are in Tennessee. “My dad grew up in Memphis,” he says. Cain has his own distinct musical style, but he readily admits to some of his influences. “My dad had a lot of really good records. B.B. King and Albert King; that kind of style was what I heard a lot in my house. When I was a teenager, he took me to see Albert King. And we always saw B.B. King.”

But as solid as those influences are, Cain’s music covers wider territory. One of the strongest tracks on Chris Cain – his 12th album – is the soulful “Telltale Signs.” It’s clearly the work of a man with a deep appreciation for the work of Ray Charles. “We saw him a bunch of times, too,” Cain says. “And even as a kid, I knew that was amazing stuff. I always loved the intimacy that Ray would have on those early records, where it’s just almost like he’s whispering in your ear.” 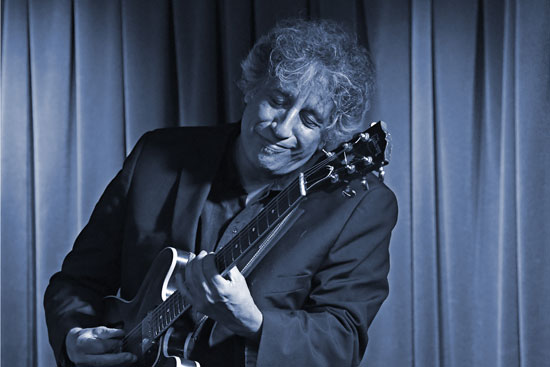 Cain originally hadn’t even planned to include “Telltale Signs” on the album. “I was just at home, doing a kind of a love letter to my dad. It wasn’t gonna be a record, and it was just stuff that I knew that he would dig.” As a result of that approach, Chris Cain has an effortless feel. Recorded at San Jose’s famed Greaseland Studios, the album was recorded in a mere two days. “We just played each song, and that was the take,” Cain says. “It was very easy and comfortable.”

Greaseland is run by producers Jim Pugh and Christoffer “Kid” Anderson, both of whom play on Cain’s latest album. And Cain credits their involvement as a key to the album’s high quality. “The psychology of recording stuff is one where if you start thinking about what you’re getting ready to record, people can stiffen up,” he says. “But they make it relaxed. Kid gets it [recorded] without your thinking about it long enough to get stiff!”

The setup at Greaseland is nothing like a typical studio. “It’s very loose,” Cain says. “The grand piano’s in the kitchen, and then there’s Larry Taylor with his bass standing right there. The drums are in the living room. I just dug the whole thing; it’s something I’ll never forget. I told them, ‘Just change the name to Funland,’ because man, it’s a gas.”

Cain had a method for knowing when a song was ready for inclusion on the album. “I would gauge it by Kid’s and Jimmy’s reaction. If they reacted a certain way, I’d say, ‘Oh, this is good.’” And once the album’s ten songs were cut, Cain didn’t want to leave. “I wanted to stay there and record for two more days,” he says. “Kid would come out with these beautiful vintage guitars and say, ‘Here, use this one on this track.’”

As a multiple Grammy award winner, Jim Pugh has a long and esteemed musical career of his own. In 2014 he launched a nonprofit organization, the Little Village Foundation, dedicated to “bring music from next door to the world.” The Foundation’s label has released more than a dozen albums from as many artists; Cain’s is just the latest. Pugh nurtures the artists; “he’s a beautiful cat,” Cain says. “He seemed to really care about what I was playing, and he’s done that with a lot of musicians around here.”

Thanks in part to the efforts of the Little Village Foundation, San Jose has earned a reputation as something of a blues mecca. But Cain points out that the blues isn’t something new to local musicians and fans. “They’ve always had a blues scene going on over near San Jose State, at a place called Ricardo’s.” He notes that blues harpist Gary Smith has been a popular fixture on the local scene since the 1960s.

Cain also mentions a nearly-forgotten player from the late 1950s. “When I was a little kid, there was a San Jose blues guy, a cat named Nick Dusart. My dad used to go see him at a club somewhere. I want to try to find out some stuff about him. Because there was a local blues cat even back then, you know?”