Getting to the Point with Kim Simmonds: The Savoy Brown Interview, Part Four 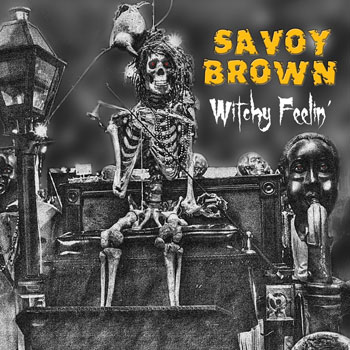 In many ways, Witchy Feelin’ hearkens back to the band’s most well-known period. As displayed on the cover of its last few album, the lettering of the band name is nearly identical to the stylized lettering used on Looking In. But beginning with 2014’s Goin’ to the Delta and continuing to the present, there’s one important difference: fronting the power trio, Simmonds is Savoy Brown’s lead – and in fact only – vocalist. The guitarist’s voice has been on every Savoy Brown record since Shake Down, but Simmonds has been the singer in his band only since 2012. He’s no Chris Youlden, but his laid-back vocal style contrasts effectively with the steely electric guitar riffs on tracks like Witchy Feelin’s “Why Did You Hoodoo Me.”

Since 2011 Savoy Brown has been releasing its music on German independent label Ruf Records. Founded by Thomas Ruf, manager of blues guitarist Luther Allison, Ruf has been home to a number of respected artists within and beyond the blues idiom, including Canned Heat, Ana Popovic, Walter Trout and Samantha Fish. “Thomas is very supportive,” Simmonds says. “He understands the band, and he understands me. I’m my own producer now. I finance my own records, and make them, and then Ruf puts them out. We have a partnership, and it’s great.”

Savoy Brown’s association with Ruf coincides with a more creatively fertile period for Simmonds and his band mates. 2011’s Voodoo Man and 2014’s Goin’ to the Delta found the band receiving its best critical notices in years, and a reinvigorated Simmonds continued to dazzle with his fiery fretwork. And it’s his guitar pyrotechnics – blazing but rarely showy or overindulgent – that have been a hallmark of Savoy Brown albums dating back to the group’s earliest days. Witchy Feelin’s “Thunder Lightning & Rain” is a lengthy, slow-burning blues guitar showcase in which the vocals take a back seat to Simmonds’ wah-wah-laden lead guitar. On its release, the album shot almost immediately to the #1 position on Billboard‘s Blues Album chart. 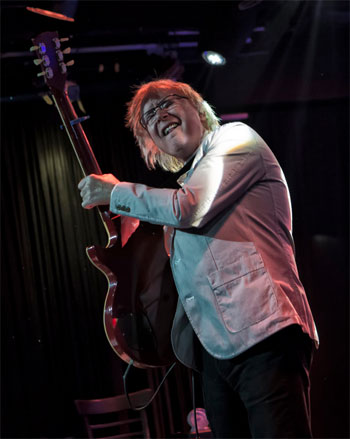 Asked about his proudest moment as a musician, Simmonds once again goes back to 1969. “The whole year of ’69 was my favorite,” he says. “Playing the old stages. I’m most proud of that; we were breaking into the American market, becoming a force to be reckoned with. In the American music world, that’s a very, very difficult thing for anybody to do. Being part of the American scene has been my greatest thrill, and that all started in 1969.”

These days, though he has a solid new album of material to promote, Simmonds is doing a good bit of thinking about the past. Last September marked a half century since the release of Shake Down. Some forty albums on, he’s as driven as ever to create music. “I think I started off with drive,” he says. “Some people have the ability to look at themselves and say, ‘I like doing this; how can I turn it into a career?’ And that’s what started me in music: ‘I can play; how can I put a band together?’ So very quickly I was able to make the band into a career rather than just playing around.”

That drive is encouraged by a more practical consideration as well, Simmonds says. “There’s a fear that drives you on, that you’ll never work again. I think if I woke up in the morning and thought, ‘Well, I don’t have to do anything now, because I’ve made it,’ then maybe I wouldn’t be around now. But I wake up every morning wanting to create, to keep going.”

He likens that inner-generated motivation to the drive that keeps people climbing mountains. “Other people would go, ‘You’ve got to be kidding me; I won’t even start myself,’ and other people get halfway up and wouldn’t bother,” he says. “You have to have the patience to do whatever you really want to do, because you were just meant to do it. I have no patience in life at all, but I have patience for music and what I do in a band. That’s the only patience I’ve got.”

November and December 2017 found Simmonds engaged in a familiar activity: playing live dates with Savoy Brown in American concert venues. Those dates were in support of the Witchy Feelin’ album, but Simmonds was already looking to the future. “It has been fun making an album – one that’s been entertaining and people have liked – on the 50th anniversary of the very first one,” he says. “I went straight into writing again for the next album, because I didn’t want to sit back and say, ‘Oh, I’ve just made a good album. I’ll just ride with it for a while.’”

Simmonds pauses to reflect for a moment upon what he’s just said. “There’s that sort of drive, again,” he says with a chuckle. “To keep moving forward. So next year we’ll have a new album out again, and we’ll see where this all takes us.”