Getting to the Point with Kim Simmonds: The Savoy Brown Interview, Part Three 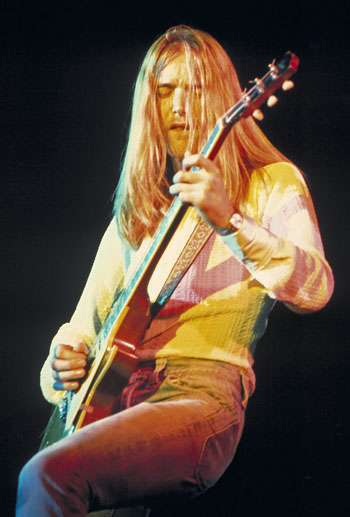 Overseas, it was a different story. The band made a point of touring regularly in the United States, building a loyal fan base in the process. But Simmonds says that the group’s prominence on American stages was only part of the key to its success there. “Touring is important, but it doesn’t get you anywhere unless you’ve got the goods,” he says. “And we had the goods; it was a fantastic band. We were cutting-edge.”

Simmonds believes that countless other musicians were influenced by the lineup that would make and release Blue Matter, A Step Further (both 1969) and Raw Sienna and Looking In (both 1970). “We were a very heavy band,” he says. “There were no pop guys [in the group]; we were the real deal.” He suggests that a lot of people thought Savoy Brown was a black group. “I think we just had a classic American sound,” he says. Every single one of the albums Savoy Brown would release between 1969 and 1981’s Rock ‘n’ Roll Warriors – 13 in all – would make it onto American album charts.

The band truly hit its stride with those 1969 and 1970 albums. With Simmonds on lead guitar, powerhouse vocalist Youlden and the Peverett/Earl/Stevens trio backing them up, the group made the most commercially successful (and some would say the best) music of its career. Working with Decca house producer Mike Vernon, Blue Matter and A Step Further combined the band’s facility in the studio with the excitement of live performance; both albums featured a mix of live and studio tracks. For A Step Further the entire second side of the original vinyl LP was given over to the marathon workout, “Savoy Brown Boogie,” while the first side exclusively featured original material penned by Youlden.

For 1970’s Raw Siena and Looking In, Savoy Brown made the decision to self-produce. Raw Siena opens with one of the band’s tightest and best-loved tunes, Youlden’s “A Hard Way to Go.” But after completion of that album, Youlden left for what turned out to be a comparatively low-profile solo career. Simmonds would pick up the songwriting slack, penning (alone or with Lonesome Dave) 8 of the 9 tracks on Looking In.

From the band’s beginning through the late 1970s, Savoy Brown was signed to Decca Records. The band was fortunate to be making records in an era during which a label could afford to stick with a group as it gained a larger following. “I think the record industry was caught by surprise by groups like Savoy Brown,” Simmonds says. “And I think that they gave us a large part of leeway because of that. We didn’t follow the normal route where you’d make a single, you’d have some success with two or three of them, and then you’d make an album.”

From the start, Savoy Brown was positioned as an album band. “And we continued on with it,” Simmonds emphasizes. “We have had some success in singles, but really as an afterthought. The albums were the thing.” And executives at Decca’s American affiliate London encouraged that approach. Simmonds singles out London Records’ Walt McGuire for special praise. “He was fantastic. Walt had sense enough to understand that he didn’t know what was happening, and just to at least support it and not get in the way.” McGuire had some experience with that mindset; in the late 1960s he championed the release of the Moody Blues’ Days of Future Passed at a time when executives at the label’s headquarters showed little interest in the groundbreaking record.

A version of Savoy Brown featuring all new members (save, as always, Simmonds on lead guitar) debuted in 1971. Street Corner Talking would include perhaps the band’s most well-known song, “Tell Mama,” featuring Simmonds’ stinging slide guitar work. But by the mid 1970s – and well into the 21st century – Savoy Brown endured a constant succession of personnel changes. While nearly all of the band’s releases in that period have something to recommend them, the band’s prime era had largely passed. Savoy Brown briefly went inactive for periods in 1979 and 1983, but Simmonds would continue to record, release albums and tour with the ever-changing lineups of his band. 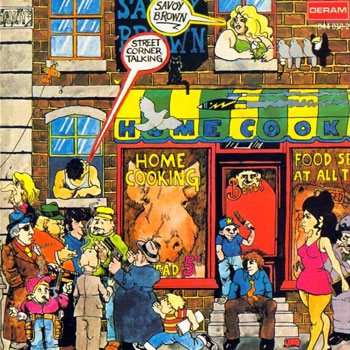 Though it’s never fallen completely from favor, the blues has seen its popularity ebb and flow. And while Savoy Brown has ventured beyond the confines of genre, the band has always maintained its Chicago-style blues roots. Still, for a time in the 1980s – not generally regarded as a high point in the band’s history – Savoy Brown dialed back its blues sound in favor of something a bit slicker.

“The ’80s were a strange time for me,” Simmonds admits. “ I still stuck to the music I knew, but there was a time when people around me said, ‘Hey. You should rock out more,’ and so forth. Somehow I got through the ’80s, but there have been some difficult times.” He reflects upon his career arc. “I’ve got limitations,” Simmonds says. “And I think those limitations are what give you character. And that is really what has formed my music: the fact that I can only do so much.”

Breaking the pattern of constant turnover, Savoy Brown settled into a stable lineup nearly a decade ago; bassist Pat DeSalvo and drummer Garnet Grimm have backed Simmonds since 2009. And Simmonds readily gives credit for that stability to his rhythm section. “It’s largely due to Pat and Garnet, and not much to me,” he says. “Because I can be very difficult to deal with. Pat and Garn really respect me and are prepared to go the extra mile. And it’s incredible to have people that really give you that respect; they’re not fighting you, they’re not doing their own thing, they are not more interested in themselves,” Simmonds says. “They’re interested in teamwork.” The current lineup has recorded six albums together (the first few also feature saxophonist/vocalist Joe Whiting), and 2017’s Witchy Feelin’ is the trio’s latest.