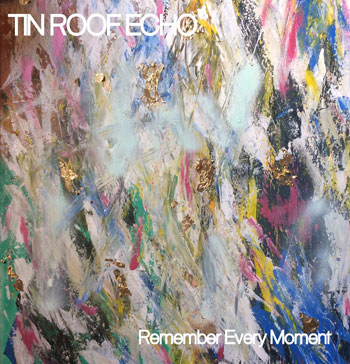 Tin Roof Echo is the one-man “bedroom folk” product of Joe Hooten, though the multi-instrumentalist goes to some length to keep his real name off of his work. That’s puzzling, as the music is of a consistently high quality. Hooten seems to sell himself a bit short on occasion: though he’s an avowed R.E.M. fetishist, his music builds upon a range of influences that extends far beyond the catalog and style of the revered Athens, Georgia foursome.

That said, Tin Roof Echo’s latest release (its fourth full-length, not counting a 2015 EP and a holiday single) is titled Remember Every Moment, a none-too-subtle nod toward Hooten’s heroes. But listeners expecting a collection of R.E.M. pastiches are in for a surprise when they spin this disc.

The album opens with “Please Don’t Wake Me.” Some may recognize the phrase from the Beatles’ “I’m Only Sleeping,” but Tin Roof Echo goes in a very different musical direction here. The tune centers around a single repeated lyrical line and some straightforward acoustic guitar, with rock backing weaving in and out of the mix. The net effect is a kind of lo-fi answer to Tom Petty.

“Nightmare” centers around a speedy, bass-led figure with thrashy guitar and over-amped, heavily distorted vocals. It has a 1980s pogo-dancing vibe; the familiar “(I’m Not Your) Stepping Stone” chord progression is delivered in a style reminiscent of Hüsker Dü.

“I Heard You Say” opens to the squeaking sound of a door, followed by a dark, freak-folk arrangement. The tune is starkly intimate, vaguely reminiscent of Skip Spence’s haunting Oar album.

“In This Dream” does in fact sound a little bit like (very early) R.E.M., especially in the gauzy nature of the vocal track. As was the Athens group’s approach in its earliest days, the vocals on “In This Dream” are more a textural element rather than a vehicle for delivering lyrics. The buzzing, chiming guitar attack is emotionally uplifting, and one assumes the words (if indeed there are any) are of a similar nature.

“Alarm Clock Blues” is another musical left-turn. The sound of an air raid siren is joined by an insistent, riff-heavy melody in which the bass often plays in lockstep with the rhythm guitar. Chugging lead guitar figures and a heavy metal “Cookie Monster” vocal (punctuated with a wordless roar) are the hallmarks of this, the briefest track on Remember Every Moment.

“Everything’s Always a Maybe” is a straightforward indie rocker. Hooten doesn’t rely overly upon traditional guitar solos, preferring instead to splash a lick here and there. And while there’s a memorable melodic line in many of his songs, he often dials it back in the mix, preferring subtlety over a more direct approach.

The gentle, acoustic and countrified nature of “Change on the Way” is merely the latest in a series of unexpected genre shifts on Remember Every Moment. it’s an effective tune with a spare, economical arrangement that places focus on Hooten’s world-weary vocal. In a sense, it feels out of place on this album, but then Tin Roof Echo’s stylistic breadth is so wide that the unexpected is, in the end, expected.

“Carry Me Home” is a slow-to-mid-tempo tune that (surprisingly) follows logically from “Change on the Way.” Shades of Neil Young and 1970s Bob Dylan can be detected in the song’s vaguely campfire-singalong demeanor. And a wonderfully dissolute lead guitar solo reinforces the Neil Young vibe.

As the album winds toward its end, a lyrical theme seems to emerge: nearly half of disc’s songs concern themselves – at least nominally – with sleep and dreaming (and, one suspects, rapid eye movement). The shoegaze-flavored “In That Dream” closes the set.

Or does it? In a curious nod back to the earliest days of the CD format, the track listed as “In That Dream” contains an additional, hidden song. With chiming guitar and a gravelly vocal from Hooten, the tune – in absence of additional information, let’s call it “Nothing Ever Works” – is perhaps the closest that Remember Every Moment comes to sounding like R.E.M. And when Hooten raises his vocals an octave, the lyrics become uncharacteristically clear, bringing to mind some of the later-period music from Athens’ favorite sons. In the end, this hidden and unnamed song represents perhaps the strongest few minutes on a pleasingly varied collection of original songs from Tin Roof Echo.