Album Review: Hope Griffin — And the Lights Will Shine

With 18 live dates scheduled in December 2017 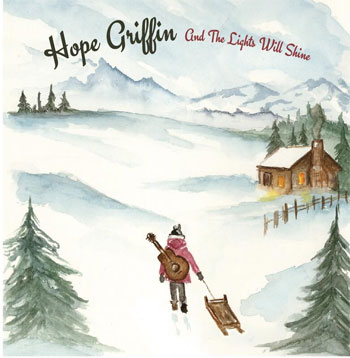 , Alaska-born folk singer-songwriter-guitarist Hope Griffin is clearly in demand. Performing in a variety of configurations – solo as well as part of a duo, trio and full band – Griffin showcases he soulful voice, straightforward arrangements and solid, accessible songwriting.

After relocating to Asheville, she released her debut single in 2012, her first EP in 2015, and her first full-length – Where the Soil & the Stars Meet – in 2016. But Griffin’s latest project isn’t a collection of original material; instead it’s an EP – six songs – called And the Lights Will Shine. The set includes five Christmas-themed songs (four standards and one original) and a New Year’s song.

The Griffin original “It’s Christmas Time” unfolds slowly, gently. Beginning with just voice and wonderfully sonorous acoustic guitar, the tune subtly adds instrumentation – most notably a lovely, understated string section – and vocal harmonies. The production is crystalline, hitting the perfect balance between a “live” feel and the polished ambience of the recording studio. Three minutes in, a catchy and memorable finger-picked guitar solo adds even more texture. There’s certainly no shortage of Christmas songs, but Griffin’s original contribution to the genre is a pleasing addition.

The remaining songs on And the Lights Will Shine are drawn from the well-known holiday music canon. And although the tunes are familiar, Griffin does an admirable job of imbuing each with her own musical character. “Jingle Bells” is taken at a comfortable, loping pace, and Griffin’s arrangement focuses on the folky (and folksy) singalong nature of the classic tune. The song’s flute solo doesn’t go anywhere unexpected, but when it comes to holiday-themed music, there’s a strong argument in favor of coloring inside the lines. And to Griffin’s credit, the de rigueur sleigh bells are kept low in the mix.

“You’re a Mean One, Mr. Grinch” is a delightfully unexpected choice to cover. The song was first heard as part of the 1966 television special How the Grinch Stole Christmas! and featured a memorable vocal by Thurl Ravenscroft (the same man who gave voice to Tony the Tiger’s slogan for Kellogg’s Frosted Flakes, “They’re grrrreat!”). In her reading of the classic, Griffin wisely takes the vocal in a direction more suited to her own range. She’s obviously having a lot of fun with the lyric, digging into it with verve and relish. She switches effortlessly between the spoken-word sections and some wonderful upper-register singing. The instrumental arrangement is stellar as well, with a very rocking electric guitar solo engaging in dialogue with a Stéphane Grappelli-flavored violin solo, all followed by some lovely horn soloing.

Griffin manages to wring copious amounts of pathos out of blues singer Charles Brown’s 1960 “Please Come Home for Christmas” in this note-perfect reading. Gently brushed drums and tear-inducing pedal steel guitar provide the primary musical accompaniment of this country-flavored arrangement as Griffin wraps herself around the heartfelt vocal.

“Have Yourself a Merry Little Christmas” is given a heart-rending reading as well. Griffin balances her assured delivery with an ambience that feels right on the edge of bursting into tears. As such, it’s definitely not designed for a cheery singalong; instead it gives voice to the melancholy that many experience during the holiday season; Griffin is to be commended for tackling that complex bundle of emotions head on instead of pasting a rictus grin onto the season. As fine as this EP is overall, Griffin’s “Have Yourself a Merry Little Christmas” is easily its most shining moment.

Griffin shifts gears (but just a bit) for the EP’s closing track. A cover of Frank Loesser’s 1947 tune “What Are You Doing New Years Eve?” features an understated arrangement built upon voice, guitar, horn, and strings. The overall feel of the previous track is carried over; it’s not the most upbeat manner in which to ring in the new year, but it feels real. And in the end that’s what counts, and it’s also what makes And the Lights will Shine a welcome addition to the long line of holiday-themed musical releases.