The Squirrel Nut Zippers: Hot for the Holidays

Founded in Chapel Hill, N.C., the Squirrel Nut Zippers were more a summer art project than a serious band. But with the 1996 smash success of “Hell” from the group’s second album, the Zippers were catapulted into mainstream success. The group folded after releasing a holiday-themed album and 2000’s Bedlam Ballroom, but founder Jimbo Mathus mounted a “revival” in celebration of the 20th anniversary of Hot. And this season the Zippers put together a holiday extravaganza, billed as the First Annual Christmas Caravan Tour.

Often pegged as a novelty act, the Squirrel Nut Zippers came onto the 1990s music scene with a dazzling stew of various musical styles. “Let’s just be honest,” Mathus says. “It was a novelty. It was a throwback musical style. And we never intended for it to be widely heard.”

But it was heard. “Hell” (and its accompanying music video) sounded and looked like nothing else happening musically at the time. With the good fortune of coincidental timing, the Zippers were lumped in with the then-burgeoning swing dance revival. 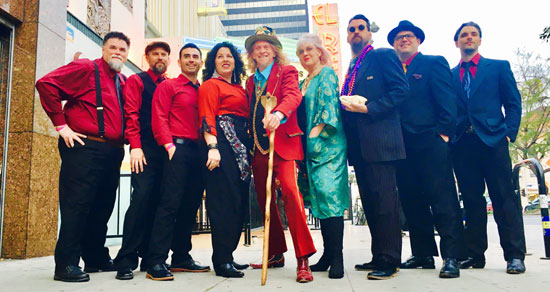 “We’re not really a swing band,” Mathus says. He notes that the Zippers’ musical approach drew (and draws) upon calypso, New Orleans hot jazz, and even German cabaret. He didn’t really mind the swing connection, though. “A lot of people in the band really resented that we were being pigeonholed some way,” he says. “And I was like, ‘Man, this is a good problem to have!’”

In the wake of the success of “Hell” and the Hot album, the Zippers toured widely. Their high profile included performances at the Summer Olympics in Atlanta, a gig at Bill Clinton’s second Inaugural Ball, and a date at New York City’s Radio City Music Hall, supporting Tony Bennett. Mathus has especially fond memories of the Radio City gig. “That was probably the highlight” of that era, he says.

“I was sitting with grandmother, my mom, my aunts and cousins, and we were watching Tony Bennett soundcheck,” Mathus recalls. “And my grandmother turned around and said, ‘I know your grandfather’s here with us right now, being able to see this. He would love this so much.’ And that’s the biggest success of my career, right there.”

The Zippers went their separate ways near the end of that decade; some members left music completely, while others remained quite active. Mathus had already launched a solo career with 1997’s Play Songs for Rosetta; he’s since released more than a dozen highly-regarded albums. He also enjoyed a tenure as part of blues man Buddy Guy’s band. Mathus’ entire career – including numerous production credits – highlights his abiding love for Americana in all its forms.

“I’m definitely a musicologist, and on any one song of mine there’ll be a myriad of references,” Mathus says, mentioning Bill Monroe, Charley Patton, T-Bone Walker and Stephen Foster. It’s that wide-screen, well-informed approach that makes his music – with and beyond the Zippers – so rich and appealing.

The 1990s lineups of the Squirrel Nut Zippers included indie sensation Andrew Bird and Asheville’s own Je Widenhouse. And the group organized reunions in the years between 2000 and the launch of the 2016 revival. But the current lineup features all new members, save leader and front man Mathus. (Asheville-based Hank West is part of the band as well.)

The Zippers recently completed a new studio album, their first since 2009’s Lost at Sea. “It’s called Beasts of Burgundy,” Mathus says, noting that the last word is pronounced Bur-GUN-dy, like the street for which it’s named. “It’s really a love letter to the counterculture of historical New Orleans. It’s a world-class album of original songs, it uses all the strengths of a 9-piece band, and everybody’s able to shine on it.” The album is scheduled for release in 2018.

Meanwhile, the holiday tour builds upon the Zippers’ 1998 Christmas Caravan album. “It was my favorite Zippers record,” Mathus says. “Because it has that great functionality to it, being a seasonal thing.” The tour presented an opportunity to play those songs and other holiday favorites in the Zippers’ inimitable style. Speaking ahead of the tour’s Asheville date in December, Mathus promised. “It’ll be something that’s out of the ordinary, and very creative and well-done.”