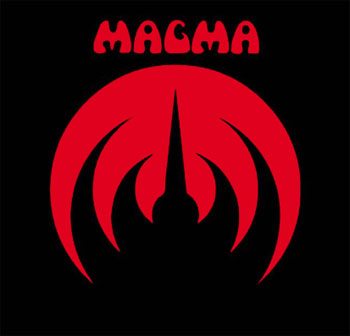 Who developed the Magma logo?

I made a drawing of the kind of necklace I wanted to have around my neck, and from that I worked with Laurent Thibault’s sister, who was a graphic designer. It changed from the original design. We worked together and we came to that logo, and then that was kept. It was hung to a chain and became the logo we are wearing and all the fans are wearing.

You know, in the beginning, it was a whole necklace all around the neck. I don’t know if Christian still has the original drawing. Yeah, he wore that necklace that was going all around the neck, but he wanted to have it [instead] like a pendant. Laurent’s sister worked to be able to hang it from a chain to make a pendant from it.

I’ve seen old photographs with the pendant, and it’s quite large…

Yeah. The first one that all the Magma musicians were wearing was large, but nowadays it’s more a small logo that all the fans want to have. There are big logos on the t-shirt. In the early days, the logo pendants were made out of copper and they were very heavy — almost half a kilo — and getting older it’s beginning to be a problem to hold that around your neck all the time!

How has your approach to making music changed in the close to 50 years since Magma began?

The first answer would be that it’s still the same approach. But we always want to bring something new. We don’t want to use what we already did to make something else from that. I am always trying to do something completely different, from scratch.

In 1970, did you ever have an idea that Magma would continue as it has into the 21st century?

Yeah, it’s written on the album cover. “Magma: Life, Death, and Beyond.”

The personnel in Magma has changed almost constantly since the beginning. Do you view that as a challenge or as an opportunity?

In fact, it’s been both. Because sometimes we thought that someone [would be] here forever, and we were very disappointed when they decided to leave, whatever the reasons. And sometimes it was really challenging to find someone that could fit really as good, but sometimes we could find someone who was even … not better; that’s not the word … was bringing something more and different on the top of all that was already done. So, sometimes a challenge, sometimes an opportunity, and sometimes both at the same time.

As the 50th anniversary of Magma approaches, what’s in the future for the band?

Well, the future is to go on as long as we can, as Christian said, “To life, death, and beyond.” So, for the 50th anniversary, we will probably think about something. We already have an option on a very special venue in Paris, which is called le Philharmonie de Paris. Brand new. We have an option for a concert here, and we don’t know yet what we’re going to do, but probably we will come out with something. And probably there will be other events and maybe other places worldwide where we’re going to try to do something very important.

You returned to the States in August for Psycho Las Vegas … a metal festival?

There are a lot of young musicians from bands like Opeth, and Baroness, Melvins and many others that are really into Magma. Sometimes we see official photos from a band that we don’t even know and the guys are wearing Magma t-shirts! Metal is a new audience for us, and it’s great.

When history is written, how would you like Magma to be remembered?

Almost every week we have a call from a music teacher saying, “I want to put on a project with my pupils. I would like them to play this piece of music or that piece of music. May we do it?” Recently, we had a call from Les Percussions de Strasbourg; it’s a very famous classical ensemble from the east of France, and they want to put on some Magma music.

So, this would be the best way to be remembered, if it’s performed the way it should be. Because I had the chance one time to listen to a tape from music from Béla Bartók conducted by Béla Bartók. And it’s very different than what you hear now, the way it’s conducted now. But we have a lot of reference of recordings, and people can refer to that. We have a good chance that it can be performed the right way, and that would be even better than words because, as I said, music comes first.

This would be the nicest way to be part of the music of these two centuries: to have even people who aren’t even born now to play Magma’s music.