What do you seek to communicate in the Kobaïan lyrics of Magma’s music?

The main purpose of the lyrics is to allow the music to be as expressive as possible. I’m always giving the example of John Coltrane who was playing an instrument; any people who are playing an instrument are expressing something that people can understand, even if there are no words. So, the lyrics are the closest possible to the music to make it sound right, because I never wanted to write in French (except for a few words in French – and a few in English). Because the idea is to have a novel of sounds that expresses the most from the music, and that’s why I invented the language: because I couldn’t do it with any existing language. The sound of the vocal is very important in Magma’s music. It has to not [distract] from the expression felt by the people listening to it.

Did the Kobaïan language come about fully-formed, or was it something that you had to work to create?

Most of the lyrics are written with the music at the same time, and in fact, when I composed the first Magma tune [related to Kobaïa], I started to sing, “Kobaïa, Kobaïa, Kobaïa.” And that’s why the planet was called Kobaïa.

So when the words come with the music, those words are in Kobaïan?

Yes. It’s the music that tells what has to be understood. And you can understand differently. You listen to some music when you are a kid, for example, and when you listen to the same music when you’re a grownup, you don’t feel it and understand it in the same way. So, at different stages, there is a different way of understanding and hearing it depending upon what was your life, what you understood during your life. And so you can go much deeper inside, or not. 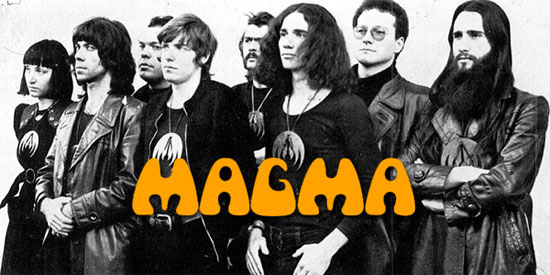 To American ears, Kobaïan sounds a little bit like German, not your native French…

Well, to American ears it might be so, but in some other countries it sounds different. People say it sounds a bit like Japanese from time to time, or like a language from the southwest of France. Christian’s grandparents were from Poland and Germany. So, he heard when he was a kid these kind of sounds, because at home they were speaking German and Polish between them. He didn’t understand it at the time — and not even now understanding either — but he heard these kind of sounds when he was a kid. German is quite a “hard” language to some; when the music is kind of hard it fits. But when the music is more mellow, you have different kind of sounds and that’s where people say sometimes, “Oh, it could just be Japanese,” or, “It could be…” We have heard many things.

Do you find it amusing that fans have compiled Kobaïan dictionaries?

To amuse is not the word. I mean, they are free to do it, and it shows that they are really into more than only listening to a band. You collect all the CDs, and you have t-shirts and posters, but this is even more. You try to translate and write a dictionary? That’s really dedication!

It strikes me that on some level, the words serve to impart an emotional content rather than an intellectual one…

And that the words are there to point in the direction of ideas as opposed to fully describe them.

Yes, and most of the time the words are coming with the music when I am composing. Sometimes there are gaps, so we fill them afterwards, but mainly, for the most part the words are coming with the music. So, after hearing the same words [associated with] some kind of mood, you could say, “Okay. This words means ‘love,’ or ‘hello,’ or ‘water,’ or whatever.” So that’s why fans could make a kind of dictionary with a few hundred words. Maybe not a hundred. I don’t even know how many!

In general, do your musical works arise from composition or improvisation?

The process starts this way. I am almost everyday on my piano playing and singing. Things come like this and that and differently from one day to the other, and [music] is probably working somewhere in my mind. It’s like a singer speaking before [he thinks], because suddenly the next day something comes and it’s much more organized and different than it was the previous day. And it looks like the beginning of something; that’s the way a real composition starts.

But before that, for a few days, or a few weeks, or even maybe a few months, it’s improvisation around many different things. Suddenly the shapes arise, but as I said, it’s more the singing that does the trick even before the mind.