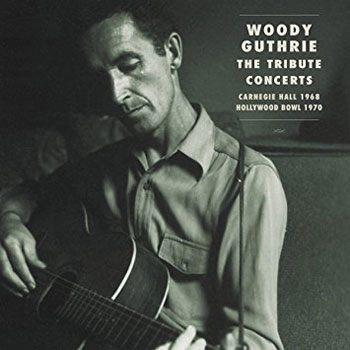 A tribute to a giant in popular music and American culture such as Woody Guthrie deserves no less than the most lavish – yet still dignified – package possible, and with The Tribute Concerts, Bear Family Productions has delivered just that. A weighty set – both in terms of content and physical form – The Tribute Concerts is much more than a CD package.

The second disc is a recording made nearly two years later at the Hollywood Bowl, and features a very different lineup: The Band, joined by Ry Cooder, Chris Ethridge and others. Much of the spoken-word parts (and the song selections) follow the 1968 show, but it’s presented differently. By its nature, it rocks much harder than the Carnegie set. While most of this material (and that on the first disc) has been released before, the Bear Family set presents the entire shows (that explains the third disc) in their entirety and in the original sequence. 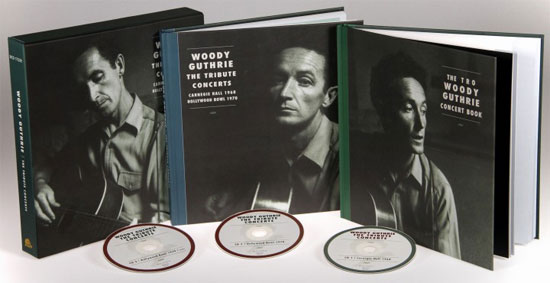 Slightly confusingly, the heavy-duty slipcase includes two volumes, but the book is called The Tribute Concerts while the CD set is called Concert Book. So you’ll be forgiven if you first pull out the wrong one when you seek the audio discs. But there’s so much to absorb in either that you can’t lose either way. The book features reproductions of the sheet music for many of Guthrie’s songs, along with loads of black-and-white photos. And in any other context, the CD “book” would be considered a coffee table book: it’s filled with photos, reproductions of memorabilia, illuminating text and more. And of course the three discs.

Just the fact that Bear Family was able to sort through the licensing of material from so many different artists is impressive; that they were able to combine material previously released on two separate major labels – Columbia and Warner Brothers — is nothing short of monumental. And the packaging is second to none.