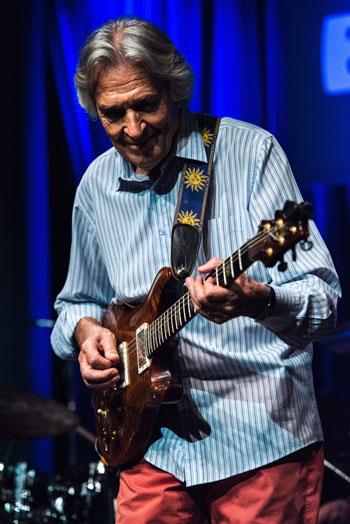 Because McLaughlin is such a painstaking composer and player, it stands to reason that he would look back on recordings he made decades ago and find fault with certain things here and there. “Of course I see faults,” he admits. “I see big, glaring faults.” But he says those things don’t bother him; he’s confident in the knowledge that he did the best he could at the time. “Of course we all learn as we go along, and retrospectively and with hindsight we always say, ‘oh, we could do it better.’ But I don’t actually think like that; I like them the way they are. And in that sense, relatively speaking, they’re perfect.”

McLaughlin believes that revisiting perceived shortcomings of one’s past work is a waste of time. “I think you’ve got to just enjoy it, or don’t listen to it,” he says. “I think it’s part of every artist’s – if I can use that word – evolution. Sometimes you’ve got to take a step backward to make a step forward.” He believes that all of the music he’s made – with Tony Williams Lifetime, with Miles Davis and even farther back – has made him what he is today. “Without those experiences and without that music, I wouldn’t be the musician I am today, and I wouldn’t be the human being I am today,” he says.

Though the music McLaughlin makes is nominally jazz, throughout his career he’s happily shared bills with artists well outside that sphere. Sometimes the pairings were a bit unusual and unlikely. “We’d go out on the road with Blue Öyster Cult or James Taylor or George Carlin or It’s a Beautiful Day,” he laughs. “I mean completely different. Lifetime played opposite The Who! Shakti played opposite Black Sabbath! But it was a beautiful time, because the whole vibe and the atmosphere was, ‘Let’s discover new music.’”

McLaughlin is filled with gratitude, and considers himself fortunate for the work he’s done with other artists. “All those great players: they, really, are the ones who made me what I am,” he says. “My life is dedicated to music, but I don’t have any story without all of these people around me.”

Though nothing from his historic 1969 studio jam with Jimi Hendrix has ever seen official release (it circulates on bootleg), McLaughlin acknowledges Hendrix as an influence. “Just take ‘The Star Spangled Banner,’ that solo piece he did,” he suggests. “Amazing, man, amazing.” He admits that the 1960s drug culture made an impression, too. “Of course we were all tripping on acid in the middle sixties,” he says. “But I quit by 1968 and said, ‘Okay, I got the message, and now I’m going to alternate consciousness through yoga and meditation,’ and that’s what I’ve been doing ever since.”

McLaughlin finds a lot to enjoy in current music; he singles out the genres of drum and bass, jungle and trap for special praise. “There are creative and innovative new forms,” he says. “There’s more happening on the underground with really radical computer guys.” And while he knows of some superb young jazz players, he does worry about the genre’s viability. “I feel bad for the young musician who is just struggling,” McLaughlin says. “They certainly don’t have the money to produce their own recordings. And even if they do, who is going to buy it?

“And this whole conservative world, people don’t listen like they used to,” McLaughlin observes. “You can be in a cafe and a bar and you hear this kind of smooth jazz, funky jazz, cool jazz. And what happens? People talk over it. They don’t listen to it. It’s wallpaper!”

Meanwhile, John McLaughlin’s own music remains ambitious, anything but musical wallpaper. The players with whom he surrounds himself are collaborators, not mere backing musicians. He credits the influence of Miles Davis upon his thinking. “Miles was a great integrator,” he says. “He had the greatest musicians in his band, and there was always this wonderful kind of nice tension between the soloists. You especially hear it on the live albums. But this kind of perspective of ‘I’m going to shred and you guys back me up’ is leaning more towards the pop kind of situation,” he says.” McLaughlin characterizes that approach: “The band is playing, the singer is out in front doing his or her thing, the musicians are backing up, and that’s it. For me, jazz is not like that.” 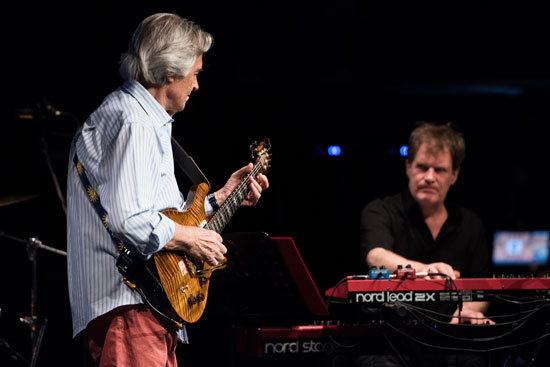 But McLaughlin’s understanding of jazz isn’t insular; he’s made a career out of drawing from other genres, while maintaining a jazz sensibility. “There are rock influences, R&B influences, Hispanic and Indian influences,” he says. “But the way of jazz is a way of personal freedom; that’s why you dedicate your life to your instrument. In the music we play and the style we play, it’s possible to have this experience of liberation. Not just as individual, but collectively too.”

A subscriber to the idea that music is indivisibly connected to spirituality, McLaughlin has long taken a spiritual approach to music. He believes that concept of liberation is the whole point of making music, but his method is as outward-focused as it is inner-directed. “People say ‘the spirit moves you,’ or ‘the inspiration comes,’” he explains. “One of the musicians gets it, and it infects the band immediately. And the audience, they know.”

His approach to music isn’t exclusionary. “We’re no different from any other,” he emphasizes. “We just play music: that’s all. You cannot fool the audience; they know absolutely what’s going on, even though they’re not always able to put a finger on it. And when music gets to that point, that’s why we live. That’s why we’re born: to try to get it to that point.”

And John McLaughlin clearly remembers the moment when he first experienced that sense of liberation through music. “That happened with [Tony Williams] Lifetime in 1969,” he recalls. “We were at some college somewhere, and it was a magical night. The inspiration came, and I kind of flew that night. “It was just a marvelous liberating experience, and I’ll never forget it.”

He readily concedes that such inspiration isn’t something that can be willed into being on demand. “It comes or it doesn’t,” he says. But he believes that The 4th Dimension does what’s needed to provide the right conditions for that inspiration. “Everybody in The 4th Dimension is aware of that necessity to give 100%,” he says. “Otherwise you’re kind of betraying the other guys. And there’s no time for betrayal; we don’t know if we’re going to be around tomorrow, so we’ve got to give it up. And we do.”

You may also enjoy: “You Can Be Who You Are,” my first interview with John McLaughlin, from 2013.