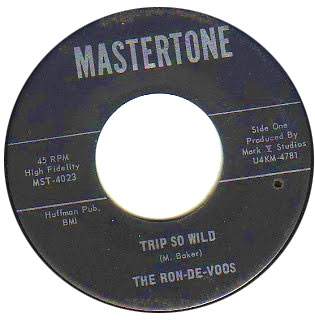 The Garage Band Aesthetic
There’s an undeniable sense of immediacy to recordings made by garage bands of the 1960s; that quality is the result of the recording process: one take and out. Studio time cost money, as did the magnetic tape that captured the sounds. So when teenage bands showed up for their session, they were expected to set up their gear quickly, wait for the red light to come on, and then play their song – often just the one – “live” in the studio. Luxuries such as second takes or overdubbing were simply not part of the equation. So groups rehearsed their material ahead of time, and what went onto tape was effectively a document of their sound, without studio “sweetening.”

Most garage bands didn’t stay together long; their members got interested in other things, headed off to college, or were drafted and sent to Vietnam. By the late 1960s, popular music had gotten heavier, anyway. After the Ron-De-Voos broke up, Mike Baker formed the Looking Glass with other musicians; they would go on to win many Battle of the Bands competitions, but Baker had left the group before they reached their (decidedly modest) commercial peak. While the Looking Glass played Baker’s original songs, the Looking Glass never recorded any of them. “There was a period when we were seniors in high school,” recalls Baker, “when we lived a true life of celebrity: girls waiting on us at the airport, autograph signings … that kind of thing.”

“Most of what we strictly consider garage groups were white kids,” says Vance Pollock, music historian and host of the weekly “Riffin’” radio program on Asheville FM 103.3. But he notes that there was also a “voluntary intermingling” in the form of what were known as salt-and-pepper bands: an African American vocalist backed by white musicians. “There were instances of older folks who were rather set in their ways – a sign of the times – who didn’t appreciate these black and white kids making music together. But it happened, and the kids thought nothing of it.”

Girls weren’t completely cut out of the scene, either. Though their story falls toward the tail-end of the garage band era, Hendersonville-based Orange Purple Marmalade featured drummer Theresa Crouch, an accomplished musician who also sang lead on some of the group’s material.

The Scene Lives On
Pollock’s “Carolina Rock ‘n’ Roll Remembered” Facebook group is an online gathering place for fans and participants in the ’60s garage band scene. With more than 1600 members, the group shares stories, images and occasionally recordings that preserve the bygone era. “I would say half of the members are veterans of groups that may have played a Battle of the Bands or school dances,” Pollock says. “Most never cut a record, but they played. And in a lot of cases, their one claim to fame might be that they got to open up for a national touring group in a local club.”

Vance Pollock (and this writer) are by no means the only music historians with a keen interest in the garage band scene of 1960s North Carolina. Charlotte-based music journalist and award-winning photographer Daniel Coston coauthored a 2014 book titled There Was a Time: Rock & Roll in the 1960s in Charlotte, and North Carolina; while it doesn’t scratch the surface of the WNC scene of that era, it’s a fine place to begin for those interested in learning more. Back in the 1980s, Chapel Hill-based rock fanatic Ken Friedman compiled a pair of CD compilations under the Tobacco-a-Go-Go title; those present raw and real audio evidence of Carolina garage bands.

Closer to home, Greg Cartwright, leader of garage revivalist band Reigning Sound (and a deejay at Asheville FM) spins 45s from his personal collection every Friday night at the Double Crown in West Asheville. And Pollock’s “Riffin’” broadcasts every Thursday 11am-1pm; he often features guests who were a part of the local and regional ’60s music scene.

Though most of its participants have long since moved on to other things – Mike Baker hasn’t picked up a guitar since around 1970, for example – the cherished memories of a special time in modern American history remain part of our oral history. With luck, modern-day enthusiasts will continue to dig deep and further document the garage band era and the part that WNC played in it.