The following is a story I wrote in 2016 on assignment for WNC Magazine. The feature appeared in print in the October 2017 issue of the publication, with great photos and a very interesting sidebar by Vance Pollock. Herewith is my original, longer edit of the story. — bk

“The starting point has to be the Beatles,” says Mike Baker. An Asheville kid about about to turn 13, he was in front of his family’s TV set when the Beatles debuted on The Ed Sullivan Show in February 1964. The Rolling Stones arrived in California that June, playing a dozen concerts across the country. And the Beatles returned to the USA in August for a two-dozen city tour. The two groups dominated the American record singles chart that entire year. That series of events set in motion a pop culture juggernaut the effects of which are felt to this day.

In cities and towns throughout the United States, garage bands – so called because their teenage members often practiced in their parents’ garage – sprang up in a widespread attempt to follow in the footsteps of their “British Invasion” heroes. Pop culture historians estimate that no less than 40,000 such garage bands existed during the movement’s heyday (roughly 1964-67). Tom Hanks’ 1996 film That Thing You Do! is a loving and authentic capturing of the essence of the garage band scene.

The groups were diverse, but nearly all shared a key set of characteristics: they were often as untrained as they were earnest. With electric guitar(s), bass, drums and sometimes keyboards, these bands all dreamed of and aimed for whatever they might designate as success: local notoriety, adoring female fans, a bit of pocket change, or all of the above.

The scene in Asheville and WNC was no different; scores of such groups got together, played dances and took part in “Battle of the Bands” competitions. Some even wrote their own songs, and a surprising number cut a record or two. Few went on to any sort of widespread fame, but cherished memories (and the occasional photo or recording) remain. 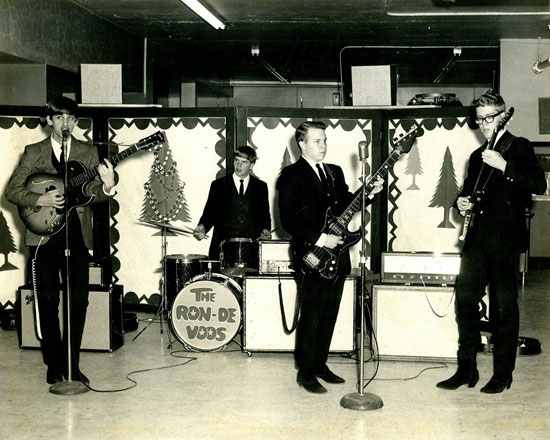 “Trip So Wild”
One such band was Asheville’s own quartet, the Ron-De-Voos. Mike Baker was the group’s rhythm guitarist and songwriter. Baker had already been interested in music; his dad played “an old, cheap, $80 Kay guitar,” Baker recalls. “He loved to play the country classics. And one day, he said, ‘Come here, boy. I want to show you something.’ He showed me [how to play] C, F and G chords.” That was in late ’63.

Soon inspired by the Beatles, Baker quickly began writing songs of his own. “I taught myself a few minor chords. You quickly learn – if you have any instinct at all – how to create a mood with carefully chosen minor chords.” Wishing to emulate his heroes, Baker says he “drifted into forming the Ron-De-Voos with some junior high school chums: Doug Kilgo, Bill Graham and Ron Watts.” They initially played covers of the Dave Clark Five, but Baker’s band mates soon found out he was writing songs. “I was kind of shy about it,” he says.

All of the band members were students at Hall Fletcher Junior High in West Asheville. Their own local template for success was a group of older musicians then attending Lee Edwards (now Asheville) High: The Fabulous Wunz, described by Baker as “Asheville’s first great garage band. We really looked up to them. When you’re 13 or 14 like I was, a 17 year old seems like an adult.”

Though it was recorded in 1967, Baker wrote the song “Trip So Wild” in 1966 when he was still 14. The song’s chorus depicts something deeper than run-of-the-mill teenage angst: “Don’t look at me / I’m in a bad way / I took a trip so wild today / I’m lost and I can’t find the way / If you color me, color me gray.” The tune has been characterized as “acid folk,” and while Baker agrees on one level, that wasn’t exactly what he was aiming for. “I was never a drug addict,” he stresses. The song’s subject matter was “purely imagined. I wanted to write a song of despair. And actually, I was thinking of heroin, not LSD,” he admits.

Sounds of the Studio
Asheville was not the regional center for professional music that it is today; recording studios like Echo Mountain and Sound Temple Studios wouldn’t appear locally for nearly another forty years. And even if such studios had existed, it’s unlikely that garage bands like the Ron-De-Voos could have mustered the cash to pay for even a one-song recording session.

So for them and other WNC garage bands, a trip to Mark V Studio in nearby Greenville SC was the most practical choice. There were a couple of other regional studios – Galaxie III in Taylorsville, and Arthur Smith Studios in Charlotte, where James Brown cut “Papa’s Got a Brand New Bag” in February 1965 – but Mark V was the go-to studio for aspiring rock stars on a shoestring budget.

“By today’s standards, I think you’d say that the recording session was rather crude,” says Baker with some understatement. But the studio quality was sufficient to capture the song’s ambiance, if not the drums (they’re all but inaudible on the record). “The speed was off; too slow. I was crestfallen with disappointment,” Baker says. But in another sense he was thrilled just to have made a record.

It’s not as if the record went onto the shelves or record stores; boxes of records were instead delivered to Baker. But a locally important figure did take notice. Baker says that WISE-AM disc jockey “Little” Joe Brown “fell in love with ‘Trip So Wild’ and played the holy hell out of it” on his radio show. “We actually had a little spell when we signed autographs at junior high school,” says Baker. “It was quite a heady thing.” He says that live performances were few, however, “limited to the occasional dance or party.”

Many records cut at Mark V would be issued on the studio’s in-house label, Mastertone. Today no one can say just how many copies of the Ron-De-Voos’ 45 RPM single “Trip So Wild” b/w “Run Run Run” were pressed, but used copies – when they appear – change hands for high prices among collectors. Equally rare is “If I Cry,” a 1966 single written and recorded by the Fabulous Wunz.

Some groups ventured even farther from home: Hazelwood NC’s the Shadows cut their moody single “She’s Like That” in 1967 in Nashville, releasing it on Gold Standard, a label that put out hundreds of one-off singles in the 1960s. (Even better was their earlier single, the rocking “Tell Me,” cut at Arthur Smith in 1966.)

Asheville had its own label, Bandit; most Bandit releases were cut at Galaxie III. Bandit specialized in rhythm and blues records; Pic and Bill (known as “Asheville’s Sam and Dave”) released several singles on the label. Few if any of these regionally-recorded singles would see national distribution, and fewer still got significant airplay or chart action.