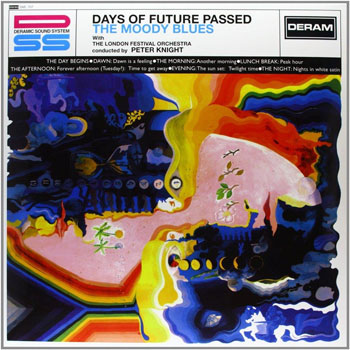 This feature appeared originally on BestClassicBands.

When most people think of the Moody Blues, the group’s classic 1967 album Days of Future Passed immediately comes to mind. But the Birmingham, England-based group started out years earlier as an r&b outfit. Various members had played together in other bands; one calling itself the Krew Cats – and featuring Ray Thomas and Mike Pinder – played an extended engagement in Hamburg, Germany, the city in which the Beatles had cut their musical teeth just a few years earlier. “We played the Top Ten Club in 1963,” says Thomas.

“Hamburg was an education,” says Pinder. “But we weren’t getting paid, and at the end Ray and I were broke. We didn’t have a pot to piss in!” They ended up at the British Embassy, where they asked for enough money to get themselves home. Pinder laughs about it now. “It was just part of our musical journey.”

The first lineup calling itself the Moody Blues got together in spring 1964, and included Thomas (vocals, tambourine, harmonica), Pinder (keyboard and vocals), drummer Graeme Edge, guitarist/singer Denny Laine, and Clint Warwick on bass and vocals. With four singers, the group was able to build a varied repertoire that featured strong vocal harmonies.

To read the rest, click to visit Best Classic Bands…