It’s not unheard of for a band to change its style as it grows and develops. But Houston-based band the Suffers makes soul music that’s far more compelling than – and completely different from – the group’s original vision. Fresh from the ordeal of Hurricane Harvey, the Suffers played an Asheville, North Carolina date at the Diana Wortham Theatre on September 22.

Even a quick spin of “Make Some Room,” the opening track on the Suffers’ self-titled 2016 debut reveals a tune deeply immersed in a 1970s soul vibe. But when bassist Adam Castaneda and keyboardist Pat Kelly first put the band together in 2011, soul music wasn’t part of their plans. Instead, explains lead singer Kam Franklin, the band’s goal was to play “reggae, ska, rock steady covers of traditional pop music.” 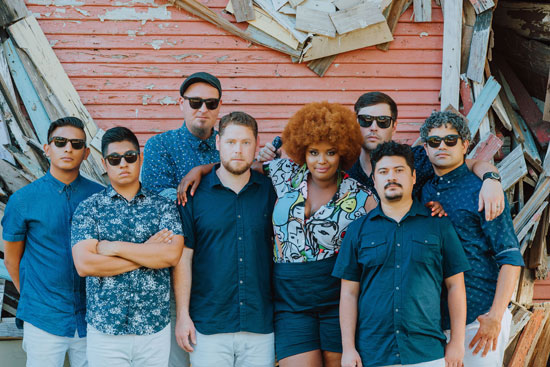 In those early days, the Suffers played only a few originals alongside the covers. “But we started realizing that there were more originals within us,” Franklin says. “And the desire to play more original music was there. So instead of forcing that off, we just kind of went with it.”

The band made the transition smoothly, but some of the group’s earliest fans in Houston had a bit more trouble accepting the new direction. “A lot of people had gotten used to us playing full-on cover sets,” Franklin says. “And we didn’t want to get to a place where that was what we were known for.” She admits that it was hard at first to win over those fans, but the Suffers did the work to “make the sets fun without feeling like we were cheating that audience. And once we started working more on evolving that original sound, things got much easier.”

With eight people onstage – guitar, bass, drums, keys, a three-person horn section and Franklin out front on vocals – it could be a challenge to keep the Suffers’ arrangements from being noisy and overly busy. But they’re as tight an ensemble as can be. “We try not to get on top of each other,” Franklin says with a laugh. “But at the same time, it’s just become a part of our natural flow.” She explains that from the band’s very beginning there was a collective decision “not to to showboat. Everybody here is capable of creating amazing sounds,” she says, “but the point of the Suffers is to try and create a space, musically, for all of us to shine.”

The Suffers is sequenced very much like a live performance, and that’s no accident. “There’s a reason every [song] is where it is,” Franklin says. “We wanted it to feel like an experience where the listener goes through all the emotions in that order.” And in an age of ProTools and potentially unlimited overdubbing, The Suffers was recorded live in the studio.

The product of that live approach is less a document of the Suffers’ current live show than what Franklin calls an introduction. “When we wrote and recorded the album, we weren’t touring,” she says. In the subsequent months on the road, the band’s sound improved further. Franklin says that when fans hear the band live, they often say things like, “Wow. Y’all sound even better than you do on the album!”

As far as the hurricane that struck Houston in late August, Franklin says that everyone in and around the group remained safe and accounted for. “Everyone’s been volunteering and – as much as we can – trying to provide emotional support to those that have lost everything,” she says, characterizing the response to Harvey as one big, city-wide effort. “Everybody’s hurting,” she concedes. “But at the same time, everybody’s very strong and knows that we’re all gonna come out of this okay.”

And the band members’ experiences with Harvey are likely to influence the character of the Suffers’ next album, already in progress. The new songs “focus on everything from spiritual relationships to the relationships that we have with our parents, with our friends, and the way that we choose to treat others and ourselves,” Franklin says. “So, after this hurricane, I’m sure it’s gonna be even more emotional stuff. I have a lot of things on my mind that I haven’t even had a chance to write about.”