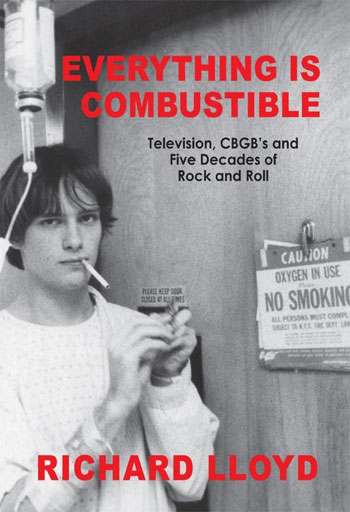 Everything is Combustible is not your run-of-the-mill rock memoir. But then Richard Lloyd is nobody’s idea of a run-of-the-mill rock musician. As a founding member and leading light of Television, Lloyd was at the front edge of New York City’s music scene in the late 1970s. And Everything is Combustible addresses that period. But Lloyd’s life has been not unlike that of Walt Whitman: it contains multitudes.

The weighty tome—it comes in just shy of 400 pages in a hardbound cover—spans Lloyd’s life from birth. In fact he spends a good bit of ink telling readers of his memories from when he was a mere nine months old. Like most every recollection in the book, the story is told in a deliberately dry, reportorial style, one completely void of both emotion and—it would seem—agenda.

Lloyd goes on to tell stories of his early efforts in wordless communication, and of entering a kind of fugue state. To take him at his word—and there’s absolutely no reason to do otherwise—is to realize that Lloyd was no average kid. His tales of sex, drugs and (eventually) rock ‘n’ roll are recounted in that same take-it-or-leave-it style.

And damned if it doesn’t work. Lloyd’s history is unusual enough that any other approach—especially one that leveraged the more salacious and sensational aspects of his life—would have failed to do justice to that story. And like any good story, each sequence of experiences and events—often presented in a kind of slightly disjointed, vignette style—all seem to lead inexorably toward the next chapter.

Lloyd subtitles his memoir “Television, CBGB’s and Five Decades of Rock and Roll” (it’s sub-subtitled “The Memoirs of an Alchemical Guitarist,” so there’s that) but readers will have to wait until Chapter 18 to get to the rock, Chapter 41 for CBGB’s, and somewhere in between for Television. Luckily the half of the book not about those things is quite engrossing … and more than a little off-kilter.

A recent backstage conversation with a member of a high-profile group yielded this quote: “Most musicians are somewhere on the [Autism] spectrum.” Far be it from me to engage in unlicensed diagnosis from afar, but time spent reading Everything is Combustible leads me to think this just may be true.

Not that there’s anything wrong with that, of course. Lloyd is a masterful storyteller, albeit a decidedly idiosyncratic one. His stories about leaving his body make sense when one reads his prose; the man often writes with a kind of detached objectivity that suggests he really can discorporate.

Readers looking for detailed accounts of exactly which Neumann mic was used on a specific Television track are doomed to come away disappointed; Everything is Combustible simply isn’t that kind of rock memoir. And while Lloyd occasionally dishes on other well-known personalities, it’s not really that kind of book, either. (He doesn’t much like Tom Verlaine, but then you probably knew that already.)

As long as one’s expectations are not set upon finding a typical memoir within its pages, time spent with Richard Lloyd’s Everything is Combustible is time well spent indeed.