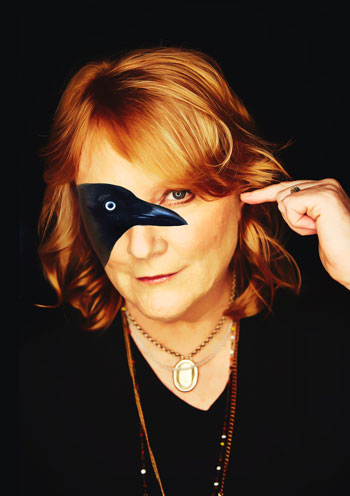 Decatur, Georgia-based folk rock duo Indigo Girls started in the mid 1980s, but Amy Ray and Emily Saliers had been friends since childhood, and musical collaborators for some time. After some singles and an EP, Indigo Girls released their debut album, Strange Fire, in 1987. They’ve gone on to widespread popularity, with more than fifteen albums to date. Both women have involved themselves in many other pursuits, from writing to activism. But not until 2017 has Saliers focused her efforts on making a solo album. Murmuration Nation showcases a broader range of Saliers’ musical interests and skills; she embarked o na solo tour (with band) in October.

Saliers says that a few of the songs on Murmuration Nation are older tunes that she and Ray had never recorded. But for the most part, “the songs were new, and they were written [with me] knowing that I was going to be making an album,” she says. “And I just kept writing and writing and writing.” From the beginning of the project, Saliers worked closely with producer Lyris Hung – a violinist and longtime Indigo Girls associate and friend – to develop a collection of songs. “I would send her parts of songs I had written, and she’d send back production ideas,” Saliers says. “So we were creating the album all along the way.”

For Murmuration Nation, Saliers assembled a top-notch group of musicians, including Snarky Puppy’s Robert “Sput” Seawright, Tedeschi Trucks Band bassist Tim LeFebre, Rachel Eckroth and Living Colour drummer Will Calhoun. That lineup helps give the album a flavor that often travels quite a distance from Indigo Girls’ signature sound. Saliers readily concedes that she “had certain intentions” in making the record. She says that at the top of the list was creating “a record that had groove, R&B-influenced or hip-hop elements.”

Her goal was to make Murmuration Nation a kind of “hybrid record” that would combine acoustic textures, electronics and “some world music influence [in the form of] the duduk, an Armenian reed instrument that I love.”

And on the lyrical side, Saliers sought to make the lyrics thoughtful, a quality consistently found in her work with Indigo Girls. As far as topics, she notes, “there’s a lot to think about what’s going on in the country … particularly now.” She says that when writing for the album, she would often lock herself away in a little room in the office building of a friend. “I sat in that room and wrote and wrote and wrote,” she says. Saliers sometimes composed on ukulele, and one result of those efforts is the track “Poethearted.”

“Typically what happens is I’ll find a chord progression, and then out of nowhere comes the content of the song,” Saliers says. “I very rarely sit down to write knowing what I’m going to write about.” She also worked extensively on Apple Logic. She says that for one track, “I just picked out a couple of loops and beats that I really liked, and then I laid down electric guitar and a chord progression.” That became “OK Corral,” an incisive song about America’s deadly fascination with guns.

“Lyris helped me form the arrangements,” Saliers says. While “OK Corral” began its life as a guitar-based song, Hung completely removed guitar from the mix. “It was really hard for me to make the adjustment at first,” Saliers admits with a laugh. “But she was like, ‘No, we’re going to do a spooky keyboard part here instead of the guitar.’ She had to talk me into a lot of things, and in the end I was so glad she did.”

Saliers is no stranger to Asheville; Indigo Girls have played here many times, especially in their early years, a time when there was a great cross-fertilization between the singer-songwriter music scenes in Atlanta, Athens and Asheville. For her first-ever tour under her own name, singer-guitarist Saliers has put together a band worthy of the material; Hung is featured on violin, and opening act Lucy Wainwright Roche sings harmony. The rhythm section features drummer Reade Pryor and Mars Volta bassist Juan Alderete.

The burst of creativity that resulted in Saliers’ first-ever solo record seems to be continuing. While she says that the shows will feature “14 of the 15 songs on the album,” there may be even newer material as well. “I’m kind of in the mood to write,” she says, “so who knows?” The set will also include a few stripped-down, acoustic readings of Indigo Girls songs.

“And then I suppose we’ll have at least one cover,” Saliers teases. “I can think of a song that I’ve always wanted to play. We might throw a little Hall & Oates in there; I don’t know. We’ll just have some fun.”

Saliers made her first recording more than thirty years ago, and it’s taken until 2017 to make a solo record. But fans won’t have to wait long for a follow-up. “I can’t wait to do the next one,” she says.