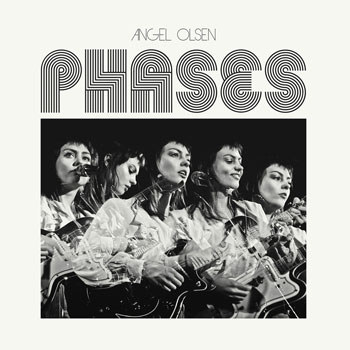 Across her first three albums and an EP, Asheville’s own Angel Olsen has carved out a musical niche of her own. Her music is perhaps best described as a collection of familiar, well-worn melodies and styles to which she applies her own stamp. Her most recent release of new material, 2016’s My Woman drew upon a number of subgenres including 80s alterna-rock (“Intern”) and Phil Spector girl-group pop (“Never Be Mine”).

Olsen’s latest release is a collection of previously-unreleased material: outtakes, demo recordings, b-sides and covers, plus two (relatively) new songs. The grab-bag nature of Phases means that the songs aren’t meant to hold together as a cohesive whole, but that doesn’t mean it’s not a worthwhile set of songs.

The most notable cut on Phases is its opening track. Recorded and released on an anti-Trump various-artists collection called Our First 100 Days, “Fly on Your Wall” is a starkly arranged tune built around a languid Olsen vocal, some insistent guitar strumming and defiantly plodding, behind-the-beat and primitive drumming.

Recorded during the My Woman sessions, “Special” feels a bit like Angel Olsen fronting the Jesus and Mary Chain, if the band spent the first half of the song playing in another room. There’s a woozy, mid-period Velvet Underground vibe to the song, which feels out of tune (even if it’s not); that quality is almost certainly a feature not a bug.

The demo recording “Only With You” adopts the approach Liz Phair used in her pre-fame “Girlysound” tapes: up close and almost uncomfortably personal. The song uses a favorite Olsen technique of subtly turning up the volume and intensity of the instrumental accompaniment as the song unfolds. Still, the arrangement remains quite understated as the song concludes.

“All Right Now” (definitely not the 1970 hit by Free) leverages Olsen’s breathiest vocal approach; how one feels about the track will depend largely on whether back-of-the-throat breathy singing is seen as appealing or tiresome. Perhaps as a balance, Phases is sequenced such that the following track, “Sans,” finds Olsen’s vocals adopting a faraway, somewhat nasal tone. The lone electric guitar is placed even farther back in the sonic landscape.

Those shifting uncomfortably in their seats through the first half of Phases as they wish for a tune with some instrumental grit and muscle are rewarded with “Sweet Dreams.” Not the 1983 single from Eurythmics, this “Sweet Dreams” has a freaky late-sixties folk-rock vibe, and it features some of the album’s best – and most varied – singing from Olsen. The instrumentation – most notably a deceptively simple guitar solo – is also top-notch.

For “California” it’s back to the spare approach. Shades of Nancy Sinatra (with Lee Hazlewood) can be found in the tune, but a strong case could be made that Joni Mitchell and Pearls Before Swine are musical touchstones here as well.

Olsen’s cover of Bruce Springsteen’s “Tougher Than the Rest” is another of those love-it-or-hate-it tunes, with a deeply affected vocal and an out-of-tune guitar that’s dialed down nearly to the point of inaudibility. A reading of Roky Erickson’s “For You” sounds as if it might be from the same demo session, though it features a more appealing vocal and louder (not to mention more interesting) guitar accompaniment.

“How Many Disasters” is a fragile and spare singer-songwriter confessional style tune; the minimalist arrangement suits the song perfectly. “May as Well” is cut from similar cloth. Phases closes with “Endless Road,” a slice of ersatz cowboy folk: a tune written by acclaimed tunesmith Hoyt Axton and originally performed on the TV series Bonanza as a duet with Pernell Roberts. Olsen changes the key and dials back the original’s sentimentality in favor of something a bit deeper.

Listeners who appreciate Angel Olsen for her arranging and instrumental skills are advised to lay hands on all of her other work first; for them, Phases is worthwhile but should be their last purchase. Those new to Olsen’s work are cautioned to start elsewhere instead. But anyone who has enjoyed the singer-songwriter’s work live and/or on record will find that Phases helps round out the listener’s understanding of Angel Olsen’s musical world.