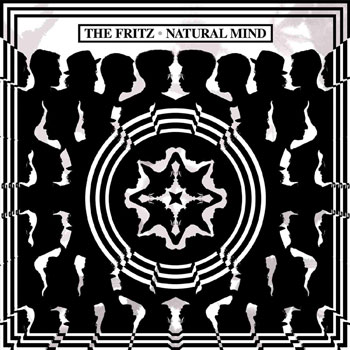 The phase-shifted synthesizer pads that introduce “Stuck in Between,” the opening track on The Fritz‘s new album Natural Mind, evokes thoughts of 1970s r&b outfit like the Brothers Johnson. But as soon as that thought forms, a repeating guitar figure enters, sounding like a more accessible version of the 1980s lineup of progressive rock giants King Crimson. And the thundering bass note that leads the rest of the band into the song only reinforces that Crimson connection.

Even though things take a decidedly accessible and funk-focused path from there, the progressive, soul and r&b references are useful touchstones for the Fritz’s brand of original music. There’s a skillful balance of taut musical interplay, top-flight musicianship, groove and thoughtful lyrics on Natural Mind. And everything’s brought together in the form of memorable tunes. Hooks and memorable vocal phrases abound on the disc’s 12 group-composed songs.

The collective approach to songwriting is carried through in arrangement; while a close listen reveals intriguing musicality form each of the band’s five musicians, the entire package is delivered as a seamless whole, one that satisfies even without that close listen. Leader Jamar Woods‘ two keyboard solos (with two very different sound textures) are irresistible, as is the soaring lead guitar solo that immoderately follows, courtesy of Jamie Hendrickson. A third keyboard solo – organ and piano – that ends the song is merely icing on the cake.

Jake O’Connor‘s sultry and assured bass guitar opens “Fact From Fiction,” leading into a song that initially feels like a 21st century update of the Isley Brothers’ classic “That Lady.” Woods has a well-honed sense of where, when and how to work keyboard textures into a song, and he does so deftly throughout Natural Mind. “Fact From Fiction” has enough charms for two songs, and in fact the vocal section doesn’t enter for some time; the track runs over 8 minutes, but not a second is wasted.

The rest of the album follows on, maintaining similar standard in both quality and variety. Woods’ keys and vocals are clearly the focus, but everyone in the group (including drummer Michael Tillis and percussionist Mikey “Spice” Evans) takes his turn at showcasing within the band context. With its subtle yet effective clavinet stabs, “Easier” feels a bit like Marvin Gaye or Steve Wonder circa 1973.

Four brief interludes break up the album. One owes more to Brian Eno’s “pop trilogy” of 1970s albums (with perhaps even a bit of krautrock influence) than any progressive or soul antecedents; its inclusion only increases the stylistic breadth of the album. The interludes also imbue Natural Mind with a sweeping, cinematic quality that – despite their undeniable charms – dance floor funksters like “Get it Together” don’t have. The hypnotic interlude “Fall Backwards” features some entrancing layered wordless vocals; like the other interludes, it’s over well short of the two-minute mark. But it could have easily gone on longer without wearing out its welcome. And “Everybody Knows” displays Woods’ facility with gospel forms.

With its insistent percussion foundation and memorable bass line, “You” is a mind movie in the tradition of Isaac Hayes’ “Theme from Shaft” and Curtis Mayfield’s “Superfly.”Yet despite all of Natural Mind‘s inescapable sonic connection to music of the past, the album sounds fresh and modern. With mere weeks left in 2017, it’s a strong contender for the year’s best album from an Asheville-based act.