The Stump Mutts: Working for the Weekend

Asheville and Western North Carolina is home to thriving scenes for most every music genre and subgenre; happily, there’s a seemingly endless supply of Americana artists, bluegrass pickers, jam band noodlers, rhyming rappers, jazz musos and synthesizer wizards. But the Stump Mutts aren’t having any of that; the four-man group from Asheville unapologetically calls itself a rock band. The group celebrated the release of its fourth studio album, Love Hate, with a September 1 show at the Grey Eagle.

And while Stump Mutts – a band that grew out of guitarist and songwriter and Neal Ward‘s one-man musical project – appreciates the advantages of local world-class recording studios like Sound Temple and Echo Mountain, Love Hate was recorded in Ward’s basement. “I started recording probably about 15 years ago,” he says. “Just learning, reading up on it, [watching] videos … all that stuff. And every time I’ve done it, it gets a little better.”

That no-frills approach – one that aims simply to document what the Stump Mutts sound like when the sing and play – is the guiding aesthetic of the 13-song Love Hate. “A lot of times in the past when I was recording I would ‘hide’ some of my vocals with effects,” Ward admits. “I might add a little more reverb on the mix; it was a self-conscious, hearing-your-own-voice thing.” Thanks to encouragements from his band mates – guitarist Derek Allen, bassist John Lindsey and drummer Patrick Wells – Ward says he quit “hiding.”

“We were going for a really ‘live’ sound,” he says. “I’ve seen plenty of bands where I’ve caught them live and then found that their album sucks, because it’s over-produced.” Moving away from the solo nature of the first two albums he released as the Stump Mutts, both 2014’s We Can All Relate and the new Love Hate benefit from the presence of a real band. 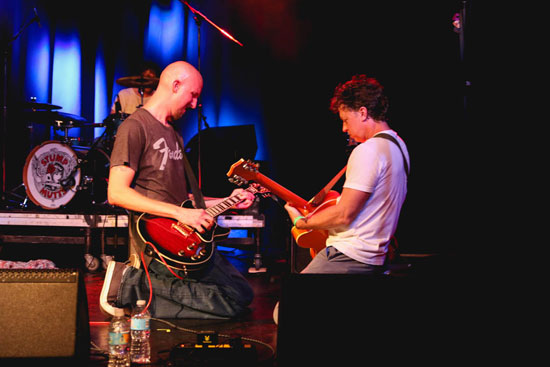 Allen’s musical path is one familiar to may musicians of his generation. “I’ve been in band since I was 15 years old, high school bands,” he says. “Went off to college, had a couple college bands.” One of those toured or seven years, playing House of Blues dates and other high-profile venues. But one by one, Ward and his band mates got married, had kids. “It was time to dial back” the music, he recalls.

Eventually, Ward and his family moved to Asheville. And though he and his wife had a toddler at home, he decided, “I still need to do music; it’s kind of my therapy.” That’s when he started work on his own to record the Stump Mutts’ 2011 self-titled debut, while putting together the home studio he calls Dolphin Rage.

Ward first came to work with drummer Patrick Wells through another band’s recording project at Dolphin Rage; when that band fell apart, he asked Wells to become part of a “real” Stump Mutts lineup, one with new songs. Meanwhile, Ward and Allen had been passing notes about music during meetings at work.

Lindsey was the last to join. Well says, “It’s hard to find a really cool bass player who doesn’t have an ego …”

Allen finishes his band mate’s sentence. “ … and who only wants to be a bass player.”

The Stump Mutts’ music isn’t completely frivolous and party-themed, though some of the song titles might lead one to suspect otherwise. Led by Lindsey’s thundering bass, the lyrics of “Hot Mess” have more in common with Cheap Trick or Van Halen. And the jangling alt-rock of opening track, “All the Kids Are Out Tonight” leans in a direction that suggests a more melodic take on the shaggy, flannel-shirted grunge of 1990s Pacific Northwest bands.

The Stump Mutts may have missed out on a potential cross-marketing tie-in – or even an endorsement deal – with their song “Cardinal Gin.” On its face, titling a song after a product made in North Carolina seems like a good strategy for an Asheville band. But the Kings Mountain-based distillery would probably have some issues with the lyric, “killer weed, Cardinal Gin.”

“They haven’t approached us or anything,” says Derek Allen.

But “Cardinal Gin” isn’t really a stoner anthem, says Ward. Instead he describes it as “a dichotomy of the guy who wants to just kinda live life and get out there and enjoy the weekend, but who has this terrible job with a terrible work week and stuff like that.”

Full of the knowledge that his and Ward’s boss might read this story, Allen quickly chimes in. “Not that we have terrible jobs and terrible work weeks.”