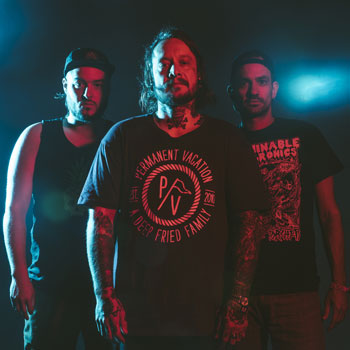 The RBTS WIN trio – synthesist Javier Bolea, vocalist/synth player Cliff B. Worsham and guitarist Josh Chassner – makes modern, electronic-based dance music. But RBTS WIN – a fixture of many Moogfests – draws upon some very old-school influences. In addition to a strong hip-hop sensibility (“Javi and I caught the initial wave of hip hop music,” says Worsham), the group’s sound is informed by the work of “spaghetti western” film scorer Ennio Morricone.

“In my production of music, I draw heavy influence from Italian movie scores and Italian dance music of the 1970s and ’80s,” says Worsham. The combination of those seemingly diametrically-opposed styles is part of what gives RBTS WIN its distinctive sound.

“We had always leaned upon hip hop music,” says Worsham, “So for us, it was a natural crossover that we could go back and forth between chillwave and a more aggressive hip hop record like Dap City [a 2015 collaboration with Rapper Shane].”

“We love exploring and working with other artists,” Bolea says, “working with rappers and other vocalists. And Cliff’s doing a lot with different psych rock bands and heavier bands. Pretty much everything we do will have our stamp on it; we’re just trying to have fun and have as much output as possible.”

Many artists operating in the electronic dance idiom focus on a trance or jam aesthetic, but RBTS WIN places a higher value on song craft. “We’re songwriters,” says Worsham. “We’re not well-trained musicians. We’re attracted to all instrumentation, but never really focus on one thing. So instead we play at a bunch of instruments.” In some ways, RBTS WIN work more in the role of producers. “We just have the ear for putting it all together,” says Worsham.

The new RBTS WIN album is a major departure from the group’s previous release. Worsham explains that 2014’s Palm Sunday “was a sample-based album. But this record has no samples; it’s all us playing synthesizers, guitars, bass, whatever. Every instrument you hear is us. I even played drums on some of the songs.” That human element characterizes the band’s live shows, too. “We don’t want to be the same sounding band every time you come to see us,” Worsham says. “We like to switch it up and surprise people.”

Sensitivity Kit is RBTS WIN’s third full-length release, and it’s also the third to be released on vinyl. A limited-run pressing will be available simultaneously with the digital and CD versions. “Vinyl is really nice because it’s such a permanent format,” Bolea says. “And it’s such a great way to display the visual side.”