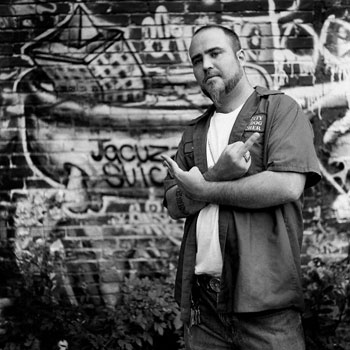 Michael Capra – aka Foul Mouth Jerk – explains title and theme of his latest release, Scofflaw. “’Scofflaw’ is a prohibition-era term for someone flagrantly flouting the more petty crimes,” he says. And Scofflaw is a collection of party songs and more political ones.

“I’m hiding a political stance under some party shit,” Capra says, “because I find that a spoonful of sugar helps the medicine go down.” So Foul Mouth Jerk is quoting Mary Poppins? “That’s what’s hot in the streets, man,” he says with a chuckle. “Mary Poppins.”

The Scofflaw project began as a series of phone calls between Capra and Gus Cutty; at the time, Cutty lived in San Francisco. “That Thanksgiving, I flew out to San Francisco,” Capra says. “We had dinner at Gus’ apartment, and then spent the next two days eating leftovers and recording the whole album. So Scofflaw was made over leftover ham and PBR tall boys.”

Recently, Capra has been working on new tracks with Asheville-based production collective Evil Note Lab; the product of those efforts will be Foul Mouth Jerk’s next album. Still, Evil Note Lab will play a major role in the debut of Scofflaw. “Since I sit in on their weekly set at the One Stop, we figured a cool way to release the album would be to do it with them,” Capra says. “It’ll be a mix of, ‘here’s the newest project,’ and ‘here’s a sneak peek of what’s coming in the next year or so.’”

Improvisation is a hallmark of Evil Note Lab’s musical approach, and that lines up well with Capra’s methods. “When I perform with them, improvisation is a huge part of it,” he says. “Because all of what they’re doing is completely off the cuff; it’s actually really amazing to watch.” Capra likens the experience of collaborating onstage with Evil Note Lab to a jump rope game of Double Dutch. “They ebb and flow,” he says. “One moment, there’s so much going on. And then other times, they strip it right down to bare-bones.”

That spontaneity is key to Foul Mouth Jerk’s own musical aesthetic. “I approach things more in the style of the early 1970s days of hip hop,” he says. “Back then, the MC was not the front man; MC was a hype man for the DJ. So when I find those little breakdowns, I might just do a hook a few times and then jump back out.”

Though Capra puts a great deal of effort into his rhymes, when it comes to live shows, it’s about dancing. “And you don’t want to bog down dance music with thick, really wordy verses,” he says. “I drop verses here and there, but mainly I just try and find the spot where I fit in,” he says. In a live setting like the release party for Scofflaw, Capra says that “the vocals are really the hype man for the music.”