Oscar Hernandez already had a long-established career and sterling reputation as a musician and arranger when he got a call from Aaron Levinson in 2000. The producer had an idea for a new project, and he was sure Hernandez was the right person to bring the idea to life. Though much of Hernandez’s work to that point was focused on helping other artists realize their own goal – he had worked with Paul Simon, Kirsty MacColl, Rubén Blades and many others – Levinson’s concept would place Hernandez front and center. After a serious of conversations during which the concept was refined, the Spanish Harlem Orchestra was born.

SHO would embody the music and culture of New York City’s storied Spanish Harlem, a neighborhood rich in history for Americans of Latino heritage. But “the idea was just to do a record,” Hernandez says today. “That’s it; nothing else.” Neither man had any particular goals or aspirations for the project beyond that. And in fact the effort almost never got off the ground. After Hernandez assembled a band, booked studio time and recorded what would eventually be released as Un Gran Dia en el Barrio, the Warner Brothers record label more or less dropped the project. 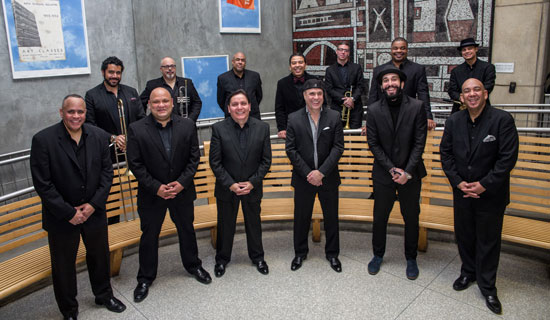 “They put it on the shelf,” Hernandez says. And there it would remain for nearly a year and a half, until Levinson found another label to release the album. Ropeadope Records released the record – whose title means “a great day in the neighborhood” – and it earned a Grammy nomination. With requests and offers to book live dates, Hernandez realized he would have to put together a touring, performing version of his Spanish Harlem Orchestra. “Here we are fifteen years later,” Hernandez says with pride, “traveling all over the world, won two Grammys, nominated four times.” He describes the mission of Spanish Harlem Orchestra as “something near, dear and precious to my heart: maintaining the history and the legacy of this music.”

Hernandez grew up only a few miles from Spanish Harlem. And the neighborhood was an important part of his youth. “It’s a place where we used to go for social events, to shop for food, and we had family there as well,” he says. “And later on I would play in clubs there.” He credits Levinson with picking the perfect name for the Latin jazz group, one that evokes the history and mystique of the neighborhood. Once the band took off, Hernandez found that there was much more interest than he had anticipated. “People were calling from Europe, Scandinavia,” he says. “’Tell us about Spanish Harlem; we see it depicted in pictures and movies.’ Because it represented a culture, a people,” Hernandez explains.

The precision and exuberance of Latin jazz is brought to life with Hernandez’s 13-man ensemble. Even on the group’s studio albums – like 2007’s United We Swing – the band vividly captures the excitement of live performance. “ Spanish Harlem Orchestra is one of the few bands that still records live [in the studio],” the bandleader explains. “If we need to, we’ll fix something later. But we’re recording live. That’s the way it was done back in the day, when I was coming up as a musician in the ’70s. It was always a natural thing, and I’ve made it a point that all of our records are recorded that way.”

The melodies and rhythms of Spanish Harlem Orchestra’s music evoke the spirit of what Hernandez calls the “big three” bands, led by Machito, Tito Rodriguez and Tito Puente. “They don’t take a back seat to Duke Ellington or Count Basie,” Hernandez insists. “The music is just as vital, just as important. I don’t spend a lot of time talking onstage, but I do tell the audience a little of that history, and the importance of it.”

And although Latin jazz is irresistible to dancers, he says that Spanish Harlem Orchestra is about much more than that. While he understands that the music makes people want to move, Hernandez prefers playing performing arts centers and festivals, “where people can sit down and listen to the chemistry, the arrangements, the musicianship.” He doesn’t want people to take all of that for granted. “Sometimes dancing trivializes the art aspect of the music,” he says.

Hernandez admits that English-speaking audiences don’t always understand the Spanish vocals, but they always react with great enthusiasm. And despite his broad background in both the pop and jazz worlds, he makes a point of maintaining the integrity of the music as he believes it should be played. “I don’t make any concessions,” Hernandez says. “I think it’s important to stay true to how I learned it, how the music was handed down to me.”