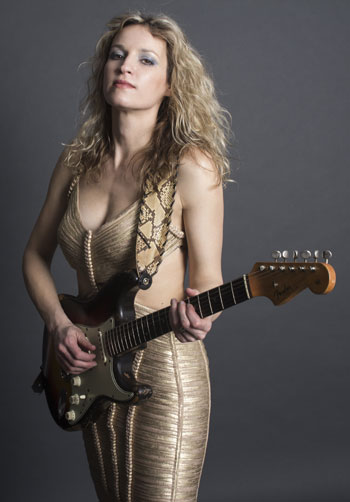 Ana Popović is nobody’s idea of a typical blues guitarist. Born and raised in Belgrade, Serbia, she nonetheless grew up immersed in the quintessentially American musical form. “I was inspired as a little girl of six or seven years old,” Popović says. “My father and his friends would play Albert King, Elmore James, Stevie Ray Vaughan and Jimi Hendrix until late at night.”

Popović learned to sing along in English long before she could understand the language. By her teenage years she had already studied jazz guitar, and would go on to a music conservatory in Utrecht, the Netherlands. But Popović was so busy playing shows that she missed quite a few exams. Her career had taken off; she released her first album in 2001, leading a band called Hush.

While a female blues guitarist is still a relatively uncommon phenomenon, Popović prefers not to focus on gender; for her, it’s about the music. “I’ve always thought it was important to have your own style and to come out strong with something different,” she says.

Over the course of nearly ten albums, Popović has developed a style all her own, one that features her sizzling guitar work in the context of more than just blues. Her most recent album, 2016’s Trilogy, has strong elements of soul, r&b and funk. “I have a perfect excuse to be different and try myself in different genres,” she says, “because I was not born in the [Mississippi] Delta.”

But Popović hasn’t abandoned the blues, and isn’t likely to do so in the future. “I absolutely love to search the new styles,” she admits, “but on every record, there’s always a deep blues cut.” And the guitarist has earned her share of honors and accolades along the way. For four successive years, Popović has been featured in the all-star “Experience Hendrix” concert tour package, playing live alongside other modern-day blues giants like Buddy Guy, Jonny Lang, Keb’ Mo and Kenny Wayne Shepherd. “I think this is where I feel most at home,” she says. “It’s not just a tribute gig; it’s all top-notch guitar players.”

Click here, for a different, longer, more in-depth conversation with the guitarist.