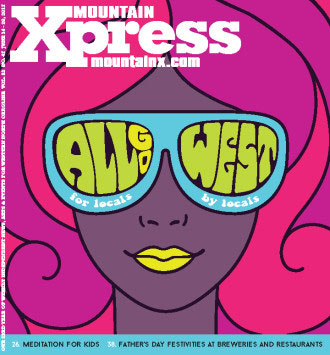 In recent years, Asheville has lost two of its long-running annual music festivals. From 1979 until 2013, Bele Chere drew an increasing number of tourists to Asheville for a popular and eclectic mix of musical acts and other arts. The high-profile yearly Moogfest relocated from New York City to Asheville in 2010 and remained here through 2014 before moving again, this time to Durham. Both events had their local supporters and detractors, but in the end, neither focused squarely on appealing to the local community. But beginning in 2010, the All Go West Festival began to fill that void. The sixth All Go West Festival took place June 17 and 18 at multiple venues in West Asheville.

The original idea for All Go West came from then-business partners Jimmy Hunt and Arieh Samson. Hunt had been running a successful annual event in Boone, Music on the Mountaintop. “Jimmy had experience with ‘site ops’ and the infrastructure of a festival, and I had the connections within the music industry in Asheville,” recalls Samson, who today is also tour manager for Rising Appalachia.

“In 2010, there were a lot of events happening in Asheville,” Samson says, noting that most were centered around downtown. “But we looked at the west side as the place where we like to hang out as locals, and decided to bring more life to that side of town.” Samson hoped that All Go West would “present the weirder side of the music scene.” And most notably, instead of aiming to make All Go West a tourist attraction, it would be local in both its lineup and its appeal.

“It’s very important to present something that locals enjoy,” Samson says. “There is a lot going for tourism in Asheville, but there’s not as much happening that locals really celebrate as far as a music festival.” He sees All Go West as an opportunity to spotlight some of those qualities that make Asheville special. “I want to keep it weird enough to where locals embrace it,” he says with a laugh.

Though All Go West took 2012 off, each successive festival since 2010 has been more successful than the last. The eclectic lineup of local-based artists is a big part of the festival’s popularity. It helps that All Go West is – and has always been – a free admission event, too. But another key to its success – and a quality that sets it apart from its Moogfest and Bele Chere forbears – is that All Go West has enthusiastic support within the local business and retail community.

Samson says that from the beginning, he made a point to develop and maintain strong communication with all of the businesses in the footprint of the festival. And while feedback has been overwhelmingly positive, when problems do come up, Samson say that those are addressed. “We don’t close the streets, and we don’t put tents in front of businesses,” he points out. He says that the data collected shows that there is a large economic boom in West Asheville on the weekend of All Go West.

Several West Asheville restaurants temporarily “change their menus to cater to a grab-and-go festival crowd,” Samson notes. “Businesses are embracing it; they’re expecting a really good night of locals who will come through and then return as customers.”

When All Go West began, it was a one-day event. But Samson received complaints from many friends who work in the local service industries. “People often can’t get off work on Saturday, so they’d miss it,” he says. So beginning this year, the festival expands to two days.

Yet none of all that would matter much if All Go West didn’t feature musical acts worth seeing. Though there’s certainly an unconventional character to the festival’s choice of performers, All Go West manages to feature something for most every musical taste. Samson says that the main outdoor stage presents a family-friendly experience. “Residents in West Asheville can walk up with their kids and have a full day of music there,” he says.

“Then in the Mothlight, I can book all the dark stuff,” Samson says with a sly grin. “And at Isis Music Hall, we can present another side of the scene.” He says that the festival presents an opportunity for locals who might not usually go to shows to “pop in and check stuff out.” Samson says he has received feedback from festivalgoers in the past telling him, “Wow, that was cool! I had never been in the Mothlight, and now I’m going all the time.”

It’s important to Samson that All Go West stays manageable. Bele Chere started as a local-focused event too, but it eventually grew into a tourist attraction that featured national acts; in the process it lost much of its Asheville character and most of what made it unique. Samson acknowledges that the growing popularity of All Go West is inevitably creating challenges as well.

Limited parking is chief among those. “But folks figure out a way to get over there,” Samson says, “whether it’s parking at a friend’s house and walking over, or having a barbecue during the day and then walking to the concerts.” He says that if lack of sufficient parking becomes a major issue, future All Go West festivals may employ shuttles. “But right now it just kind of works itself out,” he says.

The 2017 All Go West lineup was characteristically eclectic, featuring three dozen locally-based acts. Even if one doesn’t recognize some of the names, a random selection gives a flavor for just how varied the musical choices are. To wit: the lineup featured 4th Ward Afro-Klezmer Orchestra, Foul Mouth Jerk w/ Dr. Ock, RBTS WIN, The Space Cowboys & the Cosmic Girls, Axxa/Abraxas, Bald Mountain Boys and more than 30 other acts across its multiple (indoor and outdoor) stages in West Asheville. “I got really weird,” Samson admits, “booking innovative, left-field acts.” With All Go West, he’s doing his part to keep Asheville weird.

Note: an edited version of this feature appeared as the cover story in the June 14, 2017 edition of Mountain Xpress.