Slacktone Gets to the Good Part Quickly

Surf instrumental music is a distinct musical style, one that has persisted in popularity even as countless other musical fashions have come and gone. While today surf music enjoys a cult following, that cult is as strong as ever. And thanks to its modern-day exponents – like Los Angeles-based Slacktone, who agressively update surf music, keeping it fresh for the 21st century – the rock ‘n’ roll style that evokes surf, sun and the beach is here to stay.

Slacktone guitarist Dave Wronski recalls how he first fell in love with surf music in the 1960s. “The dad of the kid across the street had a Ventures record,” he says. “I really liked the sound of it. I had always listened to a lot of different kinds of music, and my dad and uncle were big music enthusiasts, too.” Wronski’s father had a big record collection, and even as a first-grader, young Dave would make his own mixtapes on a reel-to-reel deck.

“Then when the British Invasion hit, I got the idea of bands in my head,” Wronski says. He learned to play guitar and has been playing ever since. “I made my living that way for a long time,” he says; these days he also works at Fender Music, building the very guitars used by many surf-style musicians. 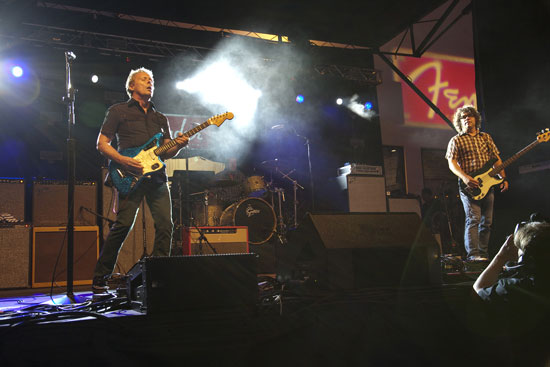 By the early 1980s, Wronski had joined Jon and the Nightriders, a popular “second wave” surf instrumental band. There he first played with drummer Dusty Watson, who today is in Slacktone with Wronski and bassist Sam Bolle. After playing on some studio recordings, Jon and the Nightriders got a gig opening for Malibu’s notorious Surf Punks at the Santa Monica Civic Auditorium.

Wronski knew how Surf Punks fans treated opening acts, but he was prepared. “I said to the other guys, ‘We’re gonna have to take care of that.’” By that time he and Dusty were seasoned players with experience in punk bands as well. So they decided to alter their approach from the band’s traditional style. “We decided we would play real fast and hard,” Wronski says with a chuckle, “and just shove it down their throats.”

The gig was a success, and soon the band took off on a tour. “We were the first instrumental surf band to go to Europe,” Wronski says. The band eventually cut some tracks – covers of surf standards – at famed Gold Star Studios with producer Shel Talmy, the man who first recorded the Who, the Kinks and David Bowie. But since Wronski wasn’t the leader of the band, he had little say in the material chosen to be recorded.

Eventually Wronski decided, “Okay, screw it. No covers. And I want to do this the way it should be done, as a three-piece.” He and Watson formed Slacktone, and from that point forward played original music. Slacktone would turn out highly-charged songs true to the surf aesthetic – lots of twang and reverb, a solid, steady backbeat – but with a harder, modern sensibility.

Wronski spends a lot of time thinking about how to convey the surf vibe in his music. He compares surf style to what celebrated film score composer Ennio Morricone did in “spaghetti western” films like The Good, The Bad and the Ugly. “Guys like him wanted to create imagery with music and sounds,” he says. With Slacktone, Wronski takes those ideas and applies them to the surf idiom. “The sound of Fender reverb, that really big and romantic guitar sound, kind of a mournful tone” is central to the music.

But Wronski and Slacktone aim to take things a step beyond the original surf groups. “Those guys wanted to create imagery to match the sport of surfing,” he says. Slacktone’s music is designed to do that as well, but also to evoke the spirit of extreme sports like snowboarding, off-road motorcycling, competitive skateboarding and mountain biking. These days, the band often gets booked to play at extreme sporting events.

For Slacktone, it’s not about long, showy jams; the songs are concise and built around razor-sharp hooks. “I listen to some pop songs,” Wronski says with a laugh, “and I think to myself, ‘get to the good part!’” His goal is to make sure that nobody who hears a Slacktone song ever says that.