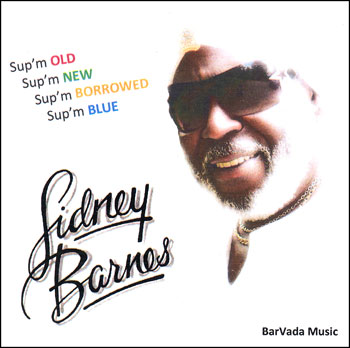 Sidney Barnes falls into the category of criminally under-appreciated musical figures. His career figures significantly into the histories of doo-wop, soul, funk, rock, pop and psychedelia. He cut “Wait” b/w “I’m Satisfied” way back in 1961, and while that record didn’t make a splash, it set him on a path he follows to this day. With his vocal group The Serenaders, Barnes cut a couple of singles; after that, he recorded solo sides for Red Bird and other historically significant labels. At the same time, he was running Motown’s New York office. And while that venture was short-lived, it afforded Barnes the opportunity to rub elbows with many of the biggest names in music. He demoed and wrote songs for many of them, establishing a career that would ultimately be most notable for his behind-the-scenes work rather than his own recordings.

That would change to some degree when he joined Rotary Connection, a new group that set out to combine pop and psychedelia. With Barnes and the voice of five-octave wonder Minnie Riperton, Rotary Connection would be one of the few multiracial groups on the late 60s pop landscape. Before and after his involvement with that group, Barnes collaborated with friend and longtime associate George Clinton. He effectively retired around 2000, though belated discovery of his early sides by “Northern soul” enthusiasts in the United Kingdom suddenly made him a concert draw again; he has since made more than a dozen trips to England.

Barnes’ musical career is well-documented by recordings, though to date there hasn’t been a comprehensive collection of his best work that provides a suitable overview of his career. A self-compiled, self-released collection, Sup’m Old, Sup’m New, Sup’m Borrowed, Sup’m Blue doesn’t quite fill that need; instead, it’s a collection of more recent material that shows the 76-year-old singer/songwriter/producer still has plenty of musical ideas.

At first listen, “Old School Music” might sound like little more than a bunch of name-dropping set to a funky beat. But listen closer and discover that it’s a kind of autobiographical tour through Barnes’ musical history. And the old-school tag sets the scene for this collection: Barnes’ musical sensibility places high value on beat and melody. The kinetic arrangements are designed to get the listener moving, but Barnes’ lyrics hold up to scrutiny, too.

Barnes isn’t trapped in the past, either; he makes effective use of vocoder effect on “People Come On.” And “Eye Witness” does an admirable job of combining hip-hop vocals, jazzy sax figures and a ’70s soul vibe. The jazzy, piano-centric “Chi-La Stepping” has a dreamy feel not unlike the kind of thing Teddy Pendergrass or Luther Vandross might have done. The faux Louis Armstrong vocal is a bit odd, but somehow, it too works.

There’s but one cover among the fifteen tracks here: a reading – no, a reinvention – of Marvin Gaye’s “Inner City Blues” is some deep, deep funk, and features an irreverent introduction reminiscent of Frank Zappa’s “Heavenly Bank Account.” Barnes’ playful approach to the song illustrates his like-mindedness with P-Funk prime mover Clinton.

“Standing on Solid Ground” is the tune that brought Barnes to the attention of the British scene. Cut around 2002, there’s happily nothing modern about the tune. In style and execution it sounds like the very best of mid-70s soul, the kind of track that would deserve prominent exposure on Soul Train. “A P-Funk Fairy Tale” is as messy and noisy as a tune with such a title should be, and of course Clinton guests, reminding listeners, “free your mind and your ass will follow.”

The collection also digs back into Barnes’ past, unearthing an album track from 1978, “Your Love is So Good To Me.” By the standards of the album overall, it’s a bit unremarkable, but does serve as a showcase for Barnes’ vocal versatility.

“I Remember Minnie” is a heartfelt slow jam tribute to Barnes’ friend and band mate Riperton, who passed away from cancer in 1979 at age 31. It stands out among the tracks on Sup’m… thanks to its tasty (if brief) electric guitar solo. Despite its low-budget, band-in-a-box feel, “Kassy” works as a dance floor raver.

The album’s title references a wedding tradition, and that’s fitting: Barnes moved to Asheville at the beginning of the 2000s to marry his new love; the couple now lives in nearby Rutherfordton. He occasionally plays live dates in an around Asheville, but despite his impressive musical track record, he remains largely unknown to the general public. As a result, as often as not, when he does perform, he presents a collection of standards rather than his own material. That said, Barnes says he has dozens of songs he hasn’t yet shared; retirement or no, he’s as musically active as ever.