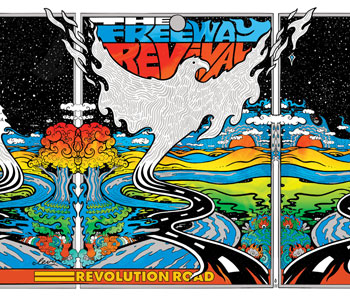 Despite its virtues, the genre of Southern rock is often plagued by a high degree of sameness: most modern-day bands worship slavishly at the altar of Lynyrd Skynyrd; the more musically accomplished among them might aim higher and model themselves after the Allman Brothers Band. But precious few offer much in the way of concise song craft, instead falling back on the self-gratification that comes from seemingly interminable instrumental breaks.

Revolution Road, the first full-length studio release from Asheville’s the Freeway Revival, suffers from none of these issues. A well-written, superbly-played collection, the album displays the group’s distinctive character. Certainly there are hints of the band’s influences – the usual suspects – but there’s a fresh and modern approach applied to all 11 group-composed songs.

The Freeway Revival clearly has the chops to go the jam band route, should it wish. One listen to the longest and perhaps strongest track, “Peace” reveals a tasty musical dialogue, first between guitarists Jonathan Clayton and Tim Husk, then Kenny Crowley on bass and Adam Clayton on piano. But all the musicians – ably supported by drummer Cartwright Brandon – exhibit an assured balance between flash and restraint. For the Freeway Revival, the song is the thing.

Vocals are another of the group’s strong suits: four of the five players sing as well. And while the band’s lyrics are interesting, the wordless vocals that follow the extended instrumental break on “Peace” are among the most soul-stirring moments on the record.

Some monster drumming introduces “Soul Survivor,” a tune that effectively crosses the power blues of Cream with the second-line vibe of New Orleans brass bands. Listeners who appreciated Delaney & Bonnie in the ’70s – or who enjoy Tedeschi Trucks Band today – will find a similarly eclectic and soulful mindset at work in the music of the Freeway Revival. The band isn’t afraid to change up the time signature and beat within a song, but manages to do so in a way that is never showy.

There’s a funky, upbeat groove underpinning most of the songs on Revolution Road. The closing number, “Crickets” is among the most effective at conveying that good-timing vibe. If Spin Doctors had written less gimmicky tunes with stronger melodies back in the ’90s, they might have sounded a bit like the Freeway Revival.

The band can get heavy when it wishes, too. “Sense of Wonder” is equal parts gentleness and thunder. With a rock-solid, measured backbeat, the song provides a slow-burn setup for a blistering guitar solo. In less restrained and assured hands, that solo would go on and on; it’s in keeping with the Revolution Road‘s leave-’em-wanting-more aesthetic that the solo doesn’t overstay its welcome.

The band’s website offers streaming audio of several live shows from earlier this year; listening to live versions of songs like “Peace” and “Wanderin’” one realizes that the band’s succinct approach to making music isn’t simply a product of the studio. Though the musicians aren’t afraid to take their individual turns in the spotlight, live onstage the band is focused on songs to the same degree as on Revolution Road. Armed with its unique set of assets, the Freeway Revival seems poised for wider recognition.