The landscape of pop history is littered with one-and-done acts, artists whose first album – no matter how good it might have been – failed or was lost in the commercial marketplace. Nearly all of those groups would fade into obscurity, never again to make an album. Crack the Sky doesn’t fit into this particular narrative, though. In 1975, Rolling Stone named Crack the Sky’s first record “debut album of the year.” And then … nothing happened.

Because of the record label’s distribution problems, many potential fans couldn’t ever find those albums in their record store. As a result, Crack the Sky never got the national-level exposure it deserved. But the band, led by guitarist and songwriter John Palumbo, persevered. “I hate looking back,” Palumbo tells me. So instead he and his band mates focused on making high-energy and adventurous music for themselves, and for the band’s small yet ardent fan base. 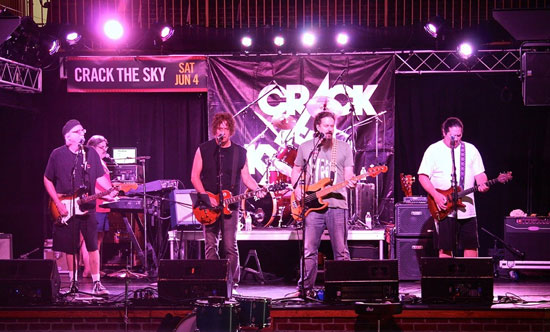 Today, Crack the Sky uses social media to connect with listeners in a way they couldn’t back in the early days. “It’s amazing how social media has shrunk the world,” Palumbo says. “Our music gets out to a whole lot more people now.”

Since 1975 Crack the Sky has released more than 25 albums. Many have been released on the band’s own label, Aluminum Cat Recordings. While most bands splinter within a few years, the 2017 lineup of Crack the Sky features three of its original members. Asked to reveal the secret to keeping a lineup together for such a long time, Palumbo chuckles and admits, “we don’t play that often!”

As driven as Palumbo is to create new music, he’s responsive to what live audiences want. Palumbo says, “we do what people want to hear; we’re there to entertain.” So while the band might preview a track or two from the upcoming album, he says Crack the Sky’s live set features “the songs people know and have grown to appreciate.” Palumbo is straightforward when he tells what people coming to the a show can expect: “Two and a half hours of rock ‘n’ roll.”