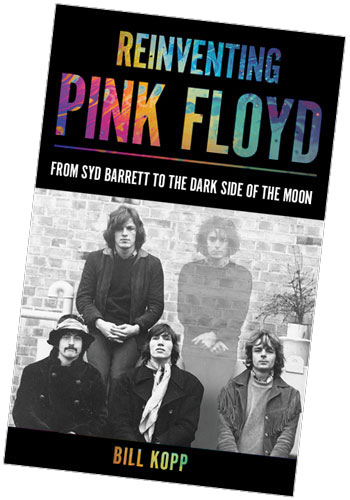 I first discovered the music of Pink Floyd in the mid 1970s. The Dark Side of the Moon had already been out a few years, and Wish You Were Here had been released, too. Animals hadn’t yet come out, so this would have been 1976. I was 11 or 12 years old, and the music was imposing, almost scary stuff. The band’s often melancholy – sometimes doomy – music struck a chord with me, though I wouldn’t come to more fully appreciate just how much it meant to me until some years later. When I first started taking piano lessons, I wanted to learn some rock alongside my classical. That didn’t really happen, so once the lessons ended, I taught myself to play by ear. Those Pink Floyd records were the tools I used.

I wrote about that period in greater detail for the introduction to my first book, Reinventing Pink Floyd: From Syd Barrett to The Dark Side of the Moon. Published by Rowman & Littlefield, the book will be available in hardcover and e-book editions in February.

As you might well imagine, I’ve been thinking a lot about Pink Floyd lately; I wrote the entire book between May and the end of August. And as it happens, this weekend marks the anniversary of the first time I saw Pink Floyd live onstage (I saw them twice, and I’ve seen Roger Waters in concert once).

The show was in 1987, and took place in the Omni, a now long-demolished hockey and basketball arena in downtown Atlanta. Sure, the acoustics of such places were dire, but the band had a superb sound system – a hallmark of Pink Floyd going back to nearly its beginning – so it sounded pretty good.

Sadly, there’s no circulating bootleg of that show, though recordings of nearly 40 other shows from the tour do circulate (and yeah, I have them). So instead I rely on my memory. It was pretty thrilling, full of all the spectacle of the band’s earlier tours: lights, lasers, inflatable figures, explosions … and of course the music. Though lyricist Roger Waters was long gone from the band, David Gilmour had put together a large touring ensemble – one that featured Nick Mason and Richard Wright – and so the music sounded Just Like the Record.

A Momentary Lapse of Reason won’t be remembered as Pink Floyd’s best album, not by a long shot. But it’s pretty good, and I’d argue that despite the album’s flaws, it has moments of near-brilliance, and plenty of the spark of old (pre-Dark Side) band.

I bought the t-shirt (long since lost to time). I didn’t buy the program. I did save the ticket stub (pictured above). And I treasure the memory still. Thirty years after that concert, and more than 40 years after discovering the band’s music, I got to write a book about Pink Floyd. To say I’m pleased is understatement.

I’ll be arranging in-store appearances as I’m able, and will make signed copies of Reinventing Pink Floyd available through online ordering. In the meantime, for updates on the book’s progress, please visit reinventingpinkfloyd.com.