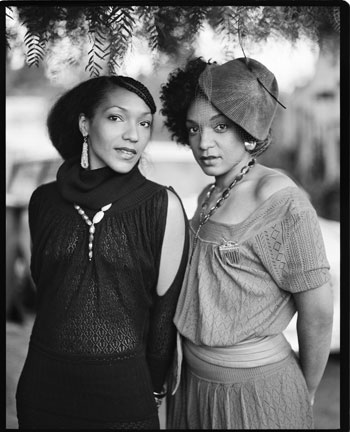 Les Nubians come by their worldly flavor honestly. The sister duo of Hélène and Célia Faussart is originally from Paris, spent time in the Central African country Chad, returned to France, and is now based in Brooklyn. Les Nubians’ neo-soul/r&b draws from an even wider musical scope that includes hip-hop, electronica and soul.

But the sum of the sisters’ diverse influences results in something organic, not forced. Hélène suggests that’s partly because of mixed heritage. “Because of our origin – a French father and a Cameroonian mother – we never felt inclined to be stuck in any kind of box,” she says. “We wanted to do music that looks like us, and that speaks to us. Because we’re doing music for ourselves first.”

Les Nubians’ debut album, 1999’s Princesses Nubiennes introduced the duo’s sophisticated, world-music take on soulful rhythm and blues. The album got a Grammy nomination and roundly positive reviews. Three more albums would follow – 2011’s Nü Revolution is the most recent – and another is in development. The duo will preview some new music in the short run of acoustic concert dates dubbed the Up Close and Personal Tour. Célia believes that approach gets at the root of the songs. Acoustic form is “how a lot of our songs give birth, get to exist,” she says.

But when the album comes out, listeners expecting an acoustic set may be surprised. Sessions for the as-yet-untitled album have been taking place in Detroit, under the guidance of producer Pirahnahead. “He’s from the electronic music [scene],” Hélène says, “but he’s more than that. He’s a musician before everything.”

And Les Nubians is absorbing the influence of the Motor City. “Detroit is this beautiful city that came back from its ashes so many times,” Hélène says. “It has amazing soul, and the encountering of all this beautiful energy in our music is turning really, really beautiful.”

Early Les Nubians albums featured the sisters singing primarily in French. These days the sisters alternate effortlessly between their native language and fluent English. The decision to record English-language vocals evolved naturally. “As we live in English, sometimes the songs come in English,” Célia explains. The decision to move to Brooklyn coincided with the sisters’ departure from a major label to become independent artists. Hélène explains the move with one word: artistry. “Through the years we developed relationships with artists and musicians, and most of them were located in Brooklyn.”

“And we’re talking about being citizens of the world,” Célia adds. “So I think it was good to come here with our children, for them to be able to experience the diversity of possibilities.”