Jonathan Scales is a world traveler, bringing his unique brand of jazz fusion to audiences around the globe. But even against that backdrop, the first half of 2017 has been an unusually active – and eye-opening – period for the steel pannist. To celebrate his 33rd birthday, Scales scheduled a rare hometown concert: the Jonathan Scales Fourchestra played the Asheville Music Hall on September 16.

In late August, Scales played at the music camp run by celebrated bassist Victor Wooten. Just days ago, he gave a TEDx Talk about following through on life goals. The last time Scales played an Asheville date was November of last year. “And since then, I’ve been to Asia and Africa,” he says. Those trips was the result of Scales’ pursuing a major goal of his own. He successfully auditioned with the U.S. State Department in hope of being selected as a cultural ambassador. 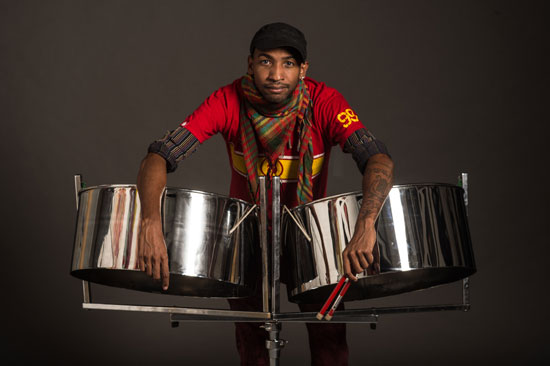 The Asia tour began in February and included extensive dates in Taiwan, Hong Kong, China and Indonesia. “It was pretty awesome to be representing the United States in that way, especially at this time in human history,” he says. And even though the U.S. had just inaugurated its 45th president – one who’s proving to be globally unpopular – Scales found that “for the most part, they understand that politics are politics and people are people.”

Scales’ four-week schedule featured public concerts, elementary school performances, recitals for university music students and the like. “We even played at a school in Taiwan for kids with disabilities,” he says. He also took part in many media events. “The interest level was really high,” he says. A street event in Indonesia attracted more than 1000 people. “As a touring musician, it’s hard to recreate that,” he says. “But when the government is sending you to a random town in Indonesia, it adds to this level of excitement.”

The success of that trip led to a further opportunity for Scales. He received a call from the State Department: “Do you want to go to Mauritania?” He readily agreed to put a group together and visit the West African country of over 4 million people.

That excursion included a fancy luncheon at the country’s French Embassy. “I felt like I was on vacation,” Scales says. As with the Asian trip, he and his touring musicians enjoyed the opportunity to experience the culture, but they did feel that their access to people and places was often being tightly managed. “So after a couple of days,” Scales says, “I asked to be out of the bubble.”

The cultural attaché in Mauritania eventually agreed, and took the Americans on a tour of the “real” Mauritania. “They made it their mission to take us around,” Scales says. He visited the local fish market, where fishermen brought in huge nets full of manta rays. He visited a home and was treated to a traditional dinner of camel. “Everyone sat on the floor, and ate from the same container, using their right hand,” he says.

The band played a show at a youth detention center. “It was a pretty intense situation,” Scales says. “I’m pretty sure most of these kids had never seen a band before.” The at-risk youth didn’t speak English, so translators recast questions from Arabic or French into English. Scales recalls one query that stopped him in his tracks: “How can music change our life?”

“I told them that when you have something to focus on, it keeps you on a good track,” he says. “Not only is music good for your brain and good for your psyche, but it also gives you that focus.” He recalls speaking to an elder at the detention center. “This man with traditional Moorish garb told me that he was very glad that I could play here,” Scales says, “and that it helped his grandson.”

Being driven around, Scales quickly realized just how different life was for people in the poor country. Even as a seasoned world traveler, he marveled at the contrast between life in Mauritania compared to other places he had visited. “It was definitely a huge vibe change,” he says. “Even from downtown Nuakchott, which I thought was third-world.”

Scales developed the sense that whatever natural resources the country might have were being exported, and not much of worth was finding its way back to the citizens of Mauritania. “You could tell that the opportunities we have are just not there,” he says.

But that wasn’t his main takeaway from the experience. Instead, he says that he realized something. “It just looks like devastation there, but they may have things more figured out than we do in terms of what’s important in life,” Scales says. “There’s more a sense of community and family. There’s a sense of what’s real, and what matters.”

You may also enjoy my previous interview with Jonathan Scales.