Note: See the update at the end of the story. — bk

Peggy Ratusz and Paula Hanke are among the most well-known musical performers in Asheville; both have played on most every stage in town, singing everything from blues to country to pop to jazz, and most everything in between. Friends since 2007, they’ve collaborated before, but the pair’s newest endeavor is perhaps their most ambitious yet. “Love is a Rose: Celebrating the Music of Torch Singer Linda Ronstadt” iss planned as the first in an ongoing project, the Women Who Make Music History Concert Series. The opening “Love is a Rose” performance was August 13 at the Tryon Performing Arts Center.

Ratusz came up with the original Women Who Make Music History concept, designed to spotlight the music of important musical figures. “But we don’t like the word tribute,” she says. We like celebrating, because we don’t copy. We interpret.” Some of the artists Hanke and Ratusz have celebrated in the past – both together and individually – include Billie Holiday, Bonnie Raitt and Etta James. “We want to get a message out to our younger sisters who might watch the show,” Hanke says. “We want to let them know about these amazing women and what they’ve done, the decisions they made that changed music.”

“We want to inspire them to follow their dreams,” Ratusz says. 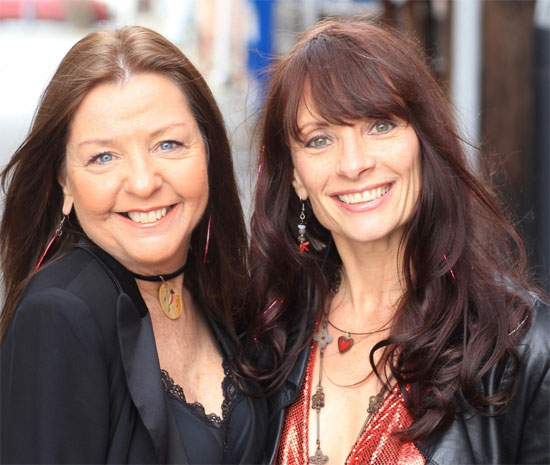 But most of the shows Ratusz and Hanke had booked were in smaller venues. And as much as both women enjoy playing locals bars and listening rooms, they wanted to expand their reach. “I don’t want to always be in a bar until two in the morning,” Ratusz admits. “I did it for six nights a week for many decades.” She and Hanke believe that a concert in the setting of a performing arts center takes things to a different level for both audience and performer.

Noting that performing arts centers often feature improved sound, lighting and other professional production values, Ratusz says that she believes playing in that kind of room gets the musical message across more effectively. “We want the subtleties of our voices to be heard,” she explains. “And we want the subtleties of our message in each song to be heard, because we tell the story of these women while we’re singing.”

Ratusz and Hanke have already begun the long-term process of promoting the Women Who Make History concept to the network of booking agents who schedule shows at performing arts centers across the country; they’ll be performing at a showcase for agents in September. Like the Tryon concert, their showcase set will feature narrative and audiovisual material in support of the live music.

So while their long-term plans call for multiple shows in various venues, right now both women are focusing their energies on the upcoming “Love is a Rose” concert. “We have to work on one show at a time,” Ratusz explains, “and we started with this one because it’s timely.” After a long and successful career as a singer, Linda Ronstadt was diagnosed with Parkinson’s Disease in 2012; the condition left her unable to sing.

When Ratusz and Hanke attended their first conference of booking agents, they suggested the idea of celebrating Ronstadt’s music and career. “People kinda lit up when we talked about Linda,” Ratusz says. “They said things like, ‘“Oh, great. I love her!’” Ronstadt’s appeal has always extended across multiple styles, from her early hit with the Stone Poneys, (“Different Drum”) to her new wave period (1980’s Mad Love), to her albums of torch song standards with conductor Nelson Riddle.

Both women make a point of noting that the summits of performers and booking agents were not at all cutthroat and competitive. “We were really taken by the camaraderie and the networking,” Hanke says. The organization for Hanke and Ratusz’s home region – the North Carolina Consortium – sponsors several “bull chat” meetings each year. “Everybody’s invited: artists, agents, theater directors,” Hanke says. Workshops focus on topics of interest to all, and there’s a great deal of collaboration. “They work together to help everyone,” Hanke says. But in the end, performers still have to compete to sell their idea to booking agents.

Hanke and Ratusz have a GoFundMe campaign to help fund their front-end efforts for the Women Who Make History Concert Series. Its goal is $20,000. “For every show, we need a new stage plot,” Ratusz says. Each production also needs a “sizzle reel,” a short video designed to win over those agents. And those things cost money.

The “Love is a Rose” performance is both the beginning of a new show and the first in a much larger, more ambitious project for Paula Hanke and Peggy Ratusz. And they aim to get every detail just right, Paula Hanke says. “The arrangements, the harmonies, the costumes…”

Peggy Ratusz finishes her friend’s sentence. “The multimedia, the staging, the lighting. Everything.”

Hanke gets the last word. “We’re out to elevate everything to make the concert series successful.”

Paula and I are in the midst of negotiating a week-long tour late in 2018 and a 17 day tour in March of 2019! Until then we will continue to present our show “Love is a Rose: Celebrating the Music of Linda Ronstadt: at smaller venues, at house concerts and in playhouses in the region during 2018.

We are entering the 4th phase of the launch of Women Who Made Music History Concert Series by raising funds to create our LLC partnership, hiring an accountant and getting ready to record an EP. We have received just over $12,000 of our $20,000 goal (it’s daunting to think it takes that much money to get a business up, but it does!) $7500 came from contributors like you and after our initial $5000 investment; that leaves $8000 more to go!

Paula and I are keenly aware that, like us, many of you have allotted your extra dollars toward easing stress for those in our country who have been adversely affected by severe weather patterns and fires. Therefore, we’re moved to announce a special winter solstice house concert where a portion of ticket sale proceeds will be donated to the recovery efforts in Puerto Rico!

From now until December 1, 2017, we are offering through our crowd funding campaign to all you FUTURE AND REPEAT DONORS, the opportunity to attend a special holiday themed House Concert where PAULA AND PEGGY will provide the FOOD, the COCKTAILS and the ENTERTAINMENT! Anyone who contributes $35 (one seat) and $60 (two seats) through our campaign between now and December 1st, will be sent an invitation to this very intimate holiday/winter solstice dinner/cocktails/concert. It is slated for the afternoon/early evening of Sunday December 17th in Fletcher, NC!