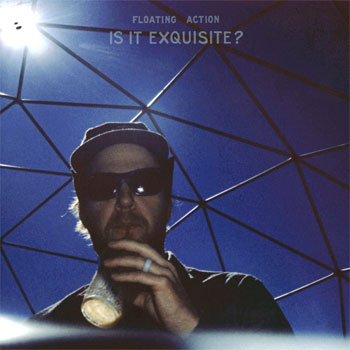 Imagine if The Soft Bulletin-era Flaming Lips were influenced as much by pop and soul as by psychedelia. Imagine, too, that they adopted a more intimate, less expansive production aesthetic. The results might sound a bit like Is it Exquisite?, the fifth album from Black Mountain NC-based Floating Action.

Though there is a live, four-man performing version of Floating Action, in the studio, Floating Action is Seth Kaufmann. And on Is it Exquisite?, he displays his full command of the studio. There’s an intentionally tinny, lo-fi ambience to the tracks, but one supposes that quality is the product of an aesthetic decision rather than the result of studio limitations.

The hypnotic aura of canned percussion is especially effective on the epic-length (well, eleven-plus minutes) instrumental, “Controlled Burn.” The relentlessly repetitive backing of the tune imbues it with a krautrock feel; Kaufmann’s subtle addition of guitar figures – sometimes close-picked, other times in the form of sustained whammy-bar chords – is set against vintage-sounding electric keyboards.

Is it Exquisite? serves up plenty of sonic variety. “Last of the Wild Cards” weds acoustic guitar and a drum machine, all in support of a plaintive, gentle vocal. And the demo-sounding psych-pop of “My Ticket Out of Here” recalls Berlin-based American expat Anton Barbeau in its combination of winning pop melody and a vaguely mysterious arrangement.

“It Won’t Be Long” (not a cover of the Beatles tune of the same name) finds Kaufmann affecting a breathy vocal reminiscent of early ’70s AM radio pop, with a catchy, understated melody to match. But the boxy synthetic drums anchor the song in more modern era (the ’80s, at least).

The aforementioned Flaming Lips vibe is even more evident on “My Blood is Bright,” a melodically straightforward tune with oddball lyrics and assorted bits of wonderful sonic weirdness. “Seek Then I Found” features a Beatlesque melody, but it’s delivered in a production style that works seamlessly within the context of the album. The tune is also notable for its effective use of background vocal harmonies, something used only sparingly – and in a more subtle fashion – elsewhere on Is it Exquisite?

“I’m Gonna Take You Down” wins the Weirdest Track on the Album award; once again Kaufmann writes a catchy tune, but the arrangement owes more to My Life in the Bush of Ghosts, the 1981 collaboration by David Byrne and Brian Eno.

“The Silent One” combines a hymn-like backing vocal with exceedingly spare instrumentation, and for its first half, it’s redolent of a bad acid trip. But the second half of this relatively brief tune transforms itself into a funky number that suggests that when the trip is over, it’s time to dance.

The phrase “late night album” applies to Floating Action’s Is it Exquisite? It’s a collection of songs best experienced via attentive listening.