The title track of Life is Fine is built around a Langston Hughes poem. What’s special to you about his words?

“That was the first time, actually, that I became aware of him. A friend just sent the poem to me and she kept going, ‘You can put a tune to it,’ and I did. I didn’t know much about him at all, but I read some more about him and read more of his poems. I was on a March-to-May tour of America, and I was in Philadelphia. I went to the market there, and I found a bookshop right at the back of the market in a really small space – all the books shoveled together – and I came across a Collected Works of Langston Hughes. I carted it all the way back to Australia, even though I didn’t have room in the suitcase.

“I don’t think he’s very well known here in Australia. But every time I posted a poem by Langston Hughes on the computer, there was a response from the crowd. He’s got all kinds of poems, and a lot of them. It might be worth mining some more; I’d be interested to know if other people have done that.” 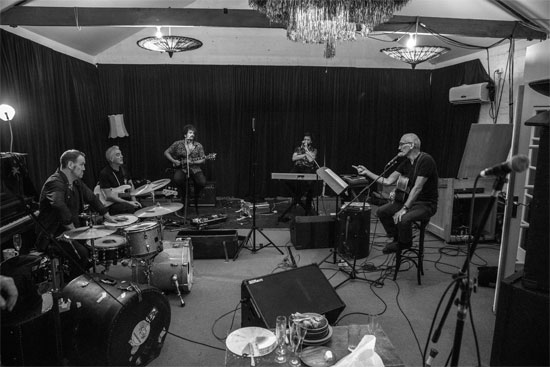 When you’re working with someone else’s lyric – whether it’s Shakespeare or Langston Hughes – how much creative license do you take?

“That’s a good question. I’ll probably sit on the fence a little bit. I always think the words are good as they are. With one sonnet, the only license I took was to change the order, switching the last two lines that rhyme and sort of sum things up. So in a couple of the sonnets – like ‘Sonnet 138’ – I changed a couple of the choruses. I didn’t change the words, but I did repeat a couple and put them earlier in the song. Generally I try not to change things other than to make a line fit, because I’d rather just leave the poem as it was.”

Your music has long been recognized for chronicling the Australian experience. Was that something that you set out deliberately to do, or is Australian character just sort of baked into your songs?

“I think it was a lot to do with my natural tendency toward what I would call visual songwriting. I was influenced a lot by songwriters like Chuck Berry and Lou Reed. With Chuck Berry, you can see that he uses language and imagery. I always think of Chuck Berry and Buddy Holly as being two mighty strands of songwriting that have sort of branched out and influenced people in different ways. Buddy Holly’s songs exist no place at all, it could be anywhere. Now, Chuck Berry’s songs, they’re little films; they’re very cinematic and you can sort of see the songs as well as hear them. The Buddy Holly line of songwriting flows through to the Beatles: me, you, love, me, do, be. Those really simple lines make up a Buddy Holly song. And those songs informed the early stage Beatles: ‘Please Please Me,’ ‘Love Me Do.’ They’re all like sort of that … they’re not set anywhere; they’re just pleasing, simple lines.

“With Chuck Berry, you can draw a line straight to Lou Reed. With Chuck it’s America, and with Lou Reed it’s Manhattan. So I guess I was aware of that; I know that the Kinks are another one: Ray Davies wrote about people swarming around like flies; quite a beautiful image of ‘Terry and Julie.’ So those cinematic songwriters, I’ve picked up on them. And then obviously I was going to write about the things around me and my characters and the places I knew, so that’s probably what happened. I try to write all types of songs – I love all types of songs – but yeah, my natural tendency is to always write about the characters in Australia. Because I’m Australian, that’s what happens.”

While American critics have long recognized your work, you’ve only really broken through on the American charts once, with “Dumb Things” in 1988. Do you think that your music is “too Australian” to make commercial inroads in the U.S.?

“I don’t think so, no. I remember hearing Chuck Berry’s ‘Memphis Tennessee’ and of course I had never been to Memphis, but that experience … the song’s not about Memphis; the song is about a father missing his daughter. And that’s universal. I don’t write about Australia; I write about people that happen to walk and talk and breathe and live and eat and fuck in Australia, but whatever they do and the things they get up to and the joys and the pains the go through are universal, so I don’t think there is any barrier there.”

The upcoming tour is your first to North America with a band in 13 years. Will the live line-up include some, most or all of the people who are on the new album?

“It will all the people who played on the record, except my nephew Dan Kelly who played on three tracks. The record was made mainly by Peter Luscombe on drums, Bill McDonald on bass, Ash Naylor on guitar and Cameron Bruce on keyboards and harmony vocals by Linda and Vika Bull. They sing a song each on the record. So we’re taking the whole kit and kaboodle. I don’t think I’ve ever taken such a large band. And of course in most recent years I’ve toured with Dan Kelly as a duo, partly for financial reasons. This time it’s such a band record, the only way to really do it is to take the band. And that’s what I’m doing.”