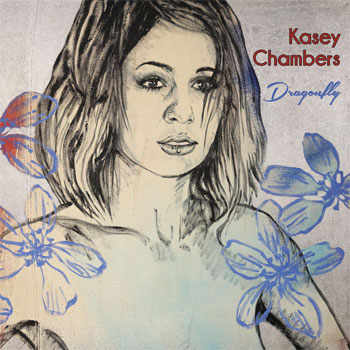 Bill Kopp: As a member of the Dead Ringer Band with your parents and brother, you enjoyed success long before you began your solo career. What lessons did you learn about music working with your family band?

Kasey Chambers: I reckon the biggest thing that I learned from those early years of playing was how important a connection with an audience is. We only really played live then; we had albums out, but those were really just something for us to sell at gigs. So my career wasn’t at all based around promotion or record labels or radio or selling records or anything like that. It was really only based around playing live: actually physically being there in the room with people.

And I learned that nothing compares to connecting on a one-on-one level with another person. And not only just in music: that became a really important thing to me in general. I think I have the perfect job for my personality. I love being out on stage and talking to an audience; I like telling stories as much as I like playing songs.

Music is a way for me to connect with people. And I learned that really early on that you can’t fake that; you can put all the bells and whistles in a song, you can get the best musicians and have all the greatest sounds. But you can’t make people connect to it.

You can tick all the boxes of what makes a hit song, but at the end of the day you still need to connect with people on some level. I do it in a way that’s not very different than what pop stars do through [releasing] singles. I do it more through a journey through my life when I’m on stage for two hours.

There are different ways of connecting, and I try not to judge other people’s ways of doing it. Some people and different audiences make the connection in different ways; some audiences connect through sounds rather than lyrics, some audiences only connect with lyrics and not sounds. So it’s about figuring out what works best for you. I think I connect through giving a whole lot of my personal life in songs and stories on stage.

Does your family music history go back farther than your parents?

Not on a professional level. My dad and his parents used to sing as a family around the kitchen table. They would sing a lot of old gospel and Carter Family songs when my dad was growing up, so music was a big part of their life. But they didn’t play instruments, and they didn’t perform in front of audiences; it was more a family thing, something that was probably done a lot more back in those days than it is now. Musical families play music, but I don’t know how many people sit around and sing at the kitchen table these days!

Looking at the whole timeline of your career, you’ve been consistent in terms of winning awards and getting critical success. You haven’t had any real missteps; in your body of work there’s not that one album that got one star …

Oh, my God … so many things. There were definitely songs I would leave off records now if I was making them now. Because there are some songs that make me cringe when I go back and listen to them. But then when I really think about it, I realize, “I felt strongly about that song enough to put it on the record at the time. It felt like a big part of me.”

And every now and then someone will say, “That’s my favorite song you’ve ever written,” and I will die a little bit inside! But I still get that the song was something that felt real and important to me at the time – important enough to put on a record – so I guess technically I wouldn’t go back and change it. But I just don’t ever want to hear that song again!

You had vocal surgery in 2015 to remove nodules. Was there a time when you thought you might not sing again?

I guess technically that was probably in the back of my mind, but I really didn’t allow myself to go to that place of really thinking, “What if I come out of this and I cannot sing?” The thing is, I’d gotten to a point where I couldn’t sing, so I was going to be no worse off; this was only a good way out.

I had to cancel a whole tour – a whole three-month tour – and we lost a whole lot of money, because it was already advertised and we were about to start the tour. Honestly, I couldn’t even get through one whole week with singing my songs, so there really was no other option for me.

So for me to sit down and go, “Oh, what if I can’t sing again?” I couldn’t really sing the way I was anyway. It was only going to look up for me to go through the surgery. I had a really great surgeon who filled me with a lot of confidence that that was the right path. Even if he was just bullshitting me every word, I was more than confident. And he was right.

When you’ve spoken about the Dragonfly track “Talking Baby Blues,” you mentioned that there was an eight-week period after the surgery during which you weren’t allowed to sing. Did the experience of not singing for those eight weeks result in a flood of new material afterward, or is that just too much of a perfect fairy tale scenario?

No, no, no … it absolutely did. It inspired a lot of new songs. And on a lot of different levels, too. Because I had this new voice that made me want to sing and want to try out different ways of writing as well. I’d never really had this range; I felt it was always in there, but it never actually came out when I sang.

Singing in this new way was really inspiring to me, but also it lifted a lot of stress that I had from having not done it for such a long time. I had been stressing about my voice even more so than I actually thought that I was doing, so I just felt like a big weight had been lifted off my shoulders.

And I was also going through a lot of personal stuff, finding a new strength within myself. Even just after a divorce and now being a single parent, I found this new side of myself that I did not know I had. All of that coupled together was great inspiration for writing songs, and is probably why I ended up with a double record.