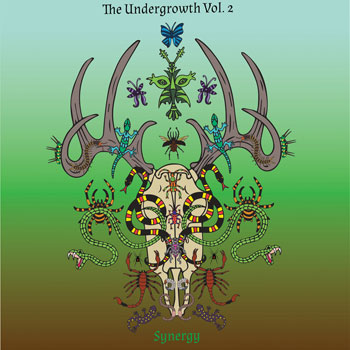 Asheville-based The Undergrowth isn’t a band. And it’s not a person. Instead, it’s a collective of musicians and producers working nominally under the musical umbrellas of electronica, drum and bass, ambient and psychedelic genres. The open-ended collective has featured at least 50 different artists, both from Asheville and around the globe. Though the music is built upon a framework of electronic instrumentation, there’s an organic mindset at work within the collective; the Undergrowth’s mission statement expresses a “love of nature and transformational festival culture.” The collective donates 10% of its profits to environmental projects and charities.

Vol. 2: Synergy is the second release from the Undergrowth; Metazoa was released in December of last year. And even though the 11 tracks on Synergy have been created by nearly as many artists (most of whom work under pseudonyms), there’s a unity of purpose and sonic sensibility among them. Often built upon soothing digital synthesizer pads, the tunes make liberal use of electronically-created beats and synthesized sounds that evoke thoughts of other instruments (sitars, banjos) and sounds (dripping water, for example). There’s a trance-y, hypnotic feel to the pieces, but there’s also a cohesive, concise mindset at work; only one of the instrumental tunes meanders past the six-minute mark, and in fact most clock in at a very pop-songish three-minutes-plus.

As opposed to the often harsh, metallic aura of today’s EDM, the tracks on Synergy float by in a calming manner. They’re not – as Brian Eno might say when describing ambient music – the aural equivalent of wallpaper, but the tracks do make for pleasant listening. Even when the beats are mixed forward – as on “Brothers,” a collaboration between Lavier and Weather Beats – the downtempo vibe remains firmly in place.

There’s a subtlety at work even on the (slightly) more aggressive tracks such as “Hardline” (by Makak and Snakko). Tantalizingly brief sampled vocal snippets add organic texture to what is one of Synergy‘s most electronic – almost industrial-leaning – tracks. The impressionistic “Wait for It” by Subturtle and AnYon is a product of the same sort of musical exploration that gave rise to groups like Ozric Tentacles. And though most all of the tracks on Synergy are the product of studio tinkering, one suspects that this material would translate superbly to a live setting. Yet one of the advantages of Synergy is that – unlike with a live performance – the listener can select a volume suitable to his or her own tastes.

Synergy is available for free streaming at the collective’s Bandcamp site (https://theundergrowth.bandcamp.com/), and the digital album can be downloaded in MP3, FLAC and other formats as well; purchasers can name-your-price.